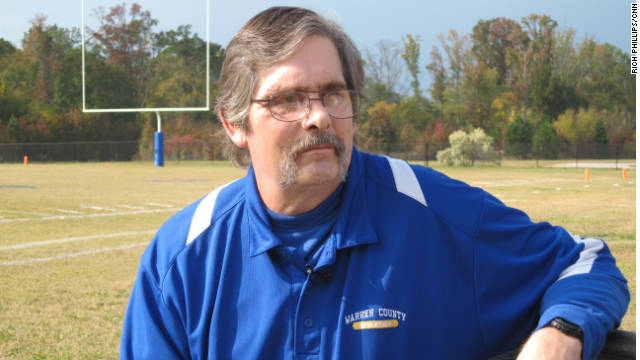 Coach David Daniel was seriously hurt when he tried to break up a fight between his players and members of a rival team.
November 5th, 2011
07:04 PM ET

Warrenton, Georgia (CNN) - Coach David Daniel's worried pacing along the sidelines of a recent game doesn't even begin to tell the story inside his mind. But the wound over his right eye gives you a sense of his pain inside, two weeks after he was caught in the middle of a post-game melee that sent him to a hospital.

Some say he was intentionally targeted by the other team. Others say it was trash talking run amok - including a text message by a coach - all set against a raging high school football rivalry in rural Georgia. Either way, a lifelong high school football coach now has bolts holding together his eye socket after it was shattered by a player's football helmet.

"It was like if you had crushed up cornflakes, that's what all this bone looked like," Daniel said, motioning to his right eye.

On the night of October 14, Daniel's team, the Screaming Devils of Warren County, defeated the Mighty Bulldogs of nearby Hancock County. As the Screaming Devils returned to the visiting team's locker room, they found the door locked. While waiting for a helper on their team to return with the key, the losing home team walked by, on the way to their locker room, and that's when it all began.