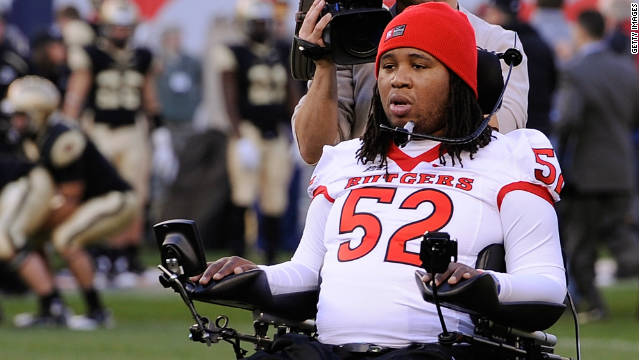 Editor's note: Steve Politi is a sports columnist for The Star-Ledger in Newark, New Jersey. He can be reached at spoliti@starledger.com, or follow him on Twitter: @StevePoliti

(CNN) - In this dark and dismal year for college sports, when each scandal seems worse than the next, inspiration arrives in a motorized wheelchair.

In a month when Penn State is dealing with child sex abuse charges against former assistant coach Jerry Sandusky, the fallout bringing down longtime head coach Joe Paterno and the university president, a reason to still believe in what's good about college football will never play another down again.

His name is Eric LeGrand, and you'll find him Saturday on the field at Rutgers Stadium in New Jersey. He will be honored at the team's annual Senior Day before a game against Cincinnati, and the expected crowd of more than 50,000 will no doubt save the loudest cheers for him.