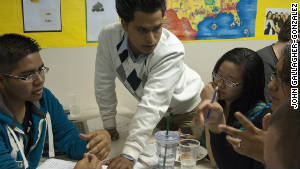 It sounds like a much more ambitious education system than in the United States. So how is it that Keish's parents, who lived an upper-middle-class life in Seoul, her father earning enough money as a salesman to enable her mother to stay at home – how is it that such a couple would move to America with one thing in mind: their children's education?
END_OF_DOCUMENT_TOKEN_TO_BE_REPLACED

Herczog: Social Studies education is key to preparing our next generation

Editor’s note: Dr. Michelle M. Herczog is a former classroom teacher and Reading Specialist and is currently the History-Social Science Consultant at the Los Angeles County Office of Education. She serves on the Board of Directors of the National Council for the Social Studies, which is holding its annual conference in Washington, D.C. this week. Dr. Herczog has authored numerous social studies curriculum materials, provided professional development to hundreds of K-12 educators, and actively advocates for legislation to support effective social studies education at local, state and national levels.

The Arab Spring, Climate Change, Occupy Wall Street, Race to the White House, and the Super Committee. Real challenges in today’s world require great thinkers, innovative problem solvers and engaged citizens of a global community. How do we prepare the next generation to address these complex challenges?

The answer lies with Social Studies education. No other subject area offers the core content knowledge and deep critical thinking about the history of the world; the impact of geography on people, places and events; the cause and effect of complex economic conditions; and the role and responsibilities of governments and citizens. Social Studies provide the background knowledge, capacity for problem solving and critical thinking, as well as the collaboration and communication skills needed to address today’s problems head on in intelligent, thoughtful ways. And whether students’ lives lead them to college or the workforce, they must also be prepared to address complex challenges as effective, engaged citizens of our nation and our world in the 21st century.
END_OF_DOCUMENT_TOKEN_TO_BE_REPLACED