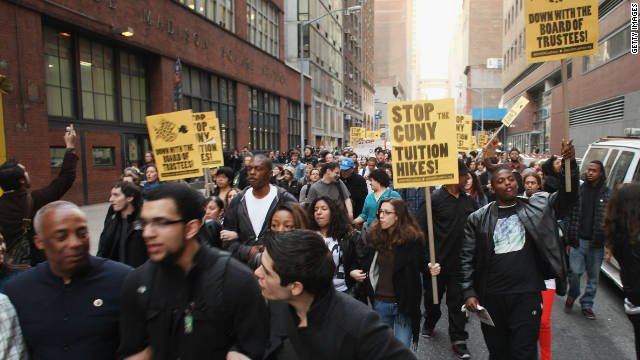 Demonstrators, joined by members of the Occupy Wall Street movement, march near Baruch College to protest proposed tuition increases at CUNY on November 28 in New York.
December 2nd, 2011
09:39 AM ET

Commentary: Why does college cost so much?

By Richard Vedder and Matthew Denhart, Special to CNN

(CNN) - College costs too much, both for students and for society as a whole.

This year, according to the College Board, average published in-state tuition and fee plus room/board charges exceed $17,000 at four-year public institutions, a 6% increase from only one year earlier.

In 2009, spending by Americans for post-secondary education totaled $461 billion, an amount 42% greater than in 2000, after accounting for inflation. This $461 billion is the equivalent of 3.3% of total U.S. gross domestic product (GDP) and an amount greater than the total GDP of countries such as Sweden, Norway and Portugal.