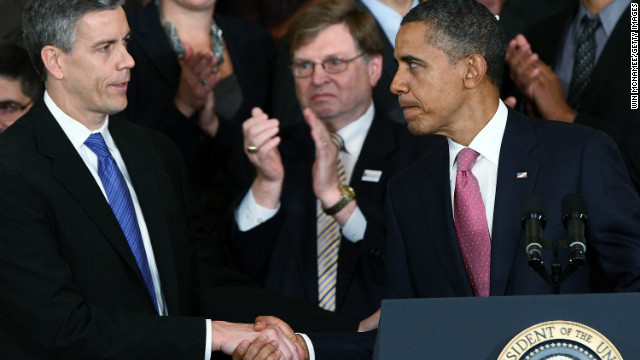 President Barack Obama shakes hands with U.S. Education Secretary Arne Duncan while speaking at an event on reform of the No Child Left Behind Act in September 2011.
January 6th, 2012
08:10 AM ET

Under NCLB, all schools are striving toward “100 percent proficiency” in math and reading by the 2013-2014 school year. That means that all students must perform to satisfaction on state tests in these subject areas by spring 2014.  Since this provision went into effect, states have set their own benchmarks toward achieving the 100% goal. The yearly benchmarks are called Adequate Yearly Progress, or AYP.

Schools are held accountable for making AYP. If a school fails to make AYP for two consecutive years it is labeled as “Needs Improvement” and school officials must formulate and implement a “turnaround plan” for that school. Schools that remain on the Needs Improvement list for additional years must offer other public school choices and/or tutoring options to their students and parents. Five years on the Needs Improvement list could cause the school to face restructuring, including terminating staff and administration and turning the school over to a private operator.

Supporters of NCLB applaud the law’s intent and its attempt to bring accountability into the classroom. There are also those who say that NCLB has resulted in movement toward closing the achievement gap between disadvantaged students and their peers.

Many NCLB opponents are focused primarily on what many call “high-stakes testing.” They argue that the testing mandated by NCLB turns classrooms into test preparation centers and takes time away from subjects that aren’t tested, like social studies and science. They also question the expense of test administration and the feasibility of attaining the 100% proficiency goal. And there are some who say that last year’s school cheating scandals are a byproduct of an education system that leans too heavily on test scores.

Where it stands now

More schools were listed as failing last year than in any previous year since the passage of NCLB. Almost half (48%) of U.S.schools did not make AYP in 2011, according to the Center on Education Policy.

In August 2011, the Obama Administration announced that states can apply for waivers from provisions of NCLB if they meet other federal mandates.   Secretary of Education Arne Duncan has said that the goal of the waivers is to provide flexibility for states while maintaining accountability and high expectations.

Critics argue that the issuance of waivers is an end-around move to circumvent a law passed by Congress, and some question its constitutionality. Others question whether the waivers amount to additional federal control of education.

In spite of a bipartisan Senate committee attempt to address changes to the law, Congress did not vote on NCLB in 2011.