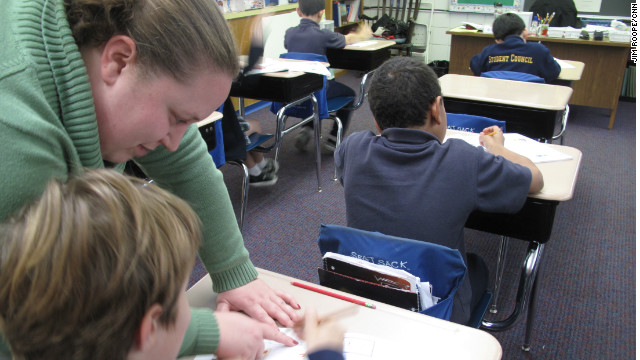 Washington (CNN) – House Republicans released draft legislation on Friday that they claim will address some of the weaknesses in the Elementary and Secondary Education Act (ESEA); shifting the responsibility for student achievement to states, school districts and parents, and removing the system of Adequate Yearly Progress (AYP) under which students are currently assessed.

Sunday, January 8, is the tenth anniversary of the latest version of the ESEA, also known as the No Child Left Behind Act. It has been in need for re-authorization since 2007. Last summer, Democrats in the Senate released their draft of re-authorization legislation.

House Education and the Workforce Committee Chairman John Kline (R-MN) in a press release said, "I'm pleased to release draft legislation that will change the status quo and put more control into the hands of the teachers, principals, superintendents and parents who know the needs of children best. This is not final legislation. It is a step forward in the ongoing debate on the best way to improved education in America."

The Student Success Act would allow states to come up with their own accountability systems for students and takes away the concept of the "highly qualified" teacher.

The Effective Teachers Act requires teacher evaluation systems that are developed by school districts which must make student achievement data a "significant" part of the evaluation. It also would give states and school districts more flexibility in how they spend federal grant money.