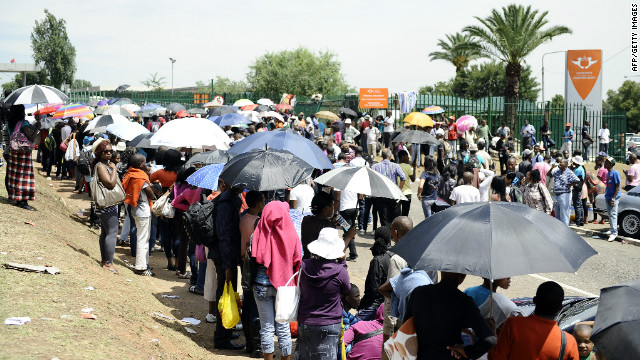 Students queue outside the University of Johannesburg to secure some of the last remaining university places on January 10, 2012.
January 11th, 2012
12:08 PM ET

South Africa: One dead in stampede for university places

Johannesburg (CNN) - A stampede on a university campus in Johannesburg Tuesday left one woman dead and several people injured, according to eyewitness reports.

The victim was the mother of one of many prospective students who had gathered in the early hours to enroll in the University of Johannesburg, according to the African National Congress Youth League, the youth wing of the governing ANC party.

Thousands of young people and their relatives had gathered outside the campus gates hoping to secure some of the last remaining university places or admission slots for students. Some chose to sleep outside overnight, desperate to sign up.