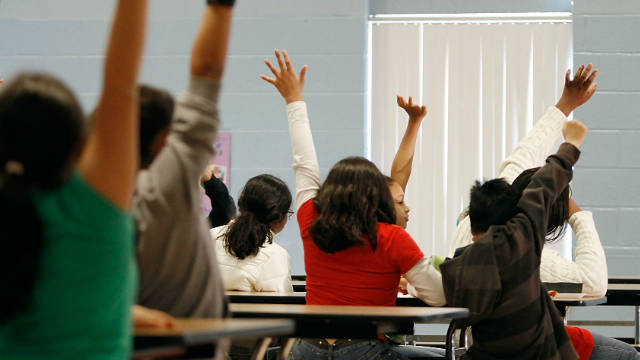 (CNN) It might not be the answer to all pedagogical prayers, but some educators say that flipping is an effective way to teach a generation that’s grown up on YouTube. Not familiar with flipped classes?  If you've got five minutes, you can learn about the concept right here.

District Administration magazine calls flipping a type of "blended learning" that is a combination of online and face-to-face approaches.  Flipping capitalizes on technology to allow students to watch online video lectures and explanations of content for homework. Students can replay the lectures several times if they need to to get a better grasp of the material while they are at home. The next day in class is spent doing what is traditionally considered homework – completing assignments like working on math problems, for example – with the teacher as more of a learning facilitator than lecturer. Classmates contribute to the learning process by working together on in-class assignments.

Technology is the key ingredient in flipping, because students must have Internet access after school hours in order to watch the lessons that educators record and upload. There are many flipped class facilitators online as well as social networks for flipping, like the Flipped Class Network. Instead of creating videos, teachers could assign Internet video tutorials that are already available. One of the most widely watched online teachers is Salman Khan, who started by doing math tutorials for his cousin on YouTube. He has since founded the Khan Academy, which now offers over 2700 instructional videos online.

Educators who have flipped classes say that the practice is beneficial. For example, a recent USA Today article describes how flipping has changed one calculus teacher’s role in the classroom and helped her students perform better on AP tests.  Flipping proponents say that this method allows for more teacher-student interaction, because the teacher is spending more time working with students one-on-one rather than standing at the front of the room lecturing. Flippers report that this approach has had positive effects on both student attendance and academic scores.

Drawbacks of the practice

Critics say that flipping may put kids on the “have not” side of the digital divide at an academic disadvantage. How can you assign students to watch a tutorial online when they don’t have Internet access at home? Some educators also warn that students may not watch the videos at home if they’re not inclined to do homework anyway.

Tomorrow, we’ll hear from a principal who saw flipping work so well in some classes that he actually flipped the entire school, and he says the results have been amazing. Check back with us.