AJC: Judge: Fulton Schools owes special-needs student in abuse case a free education
A judge ruled that a Georgia school district failed to provide a special needs student with a "free and appropriate public education." The 19-year-old student will be allowed to have a private education for the next five years – and the district has to pay for it.

TBO.com: School rankings show tie between poverty, performance
The state of Florida ranked all of its schools based on standardized test scores. In one large school district, the rankings reflected the percentage of students on free and reduced lunch.

CBSPhilly.com: Councilwoman says ads on school buses can help close budget gap
A Philadelphia City councilwoman will present a controversial proposal to help boost revenues of the city’s school district. How? By displaying ads on the district's yellow school buses.

U.S. News: President Obama to Hold White House Science Fair
The White House has announced that it will hold a science fair next week that will include students from nationally held science competitions.

Miami Herald: Senate approves school prayer bill
The Florida state senate approved a measure that would allow student-led school prayer. Some lawmakers say the bill as written is unconstitutional and could subject the state to lawsuits. 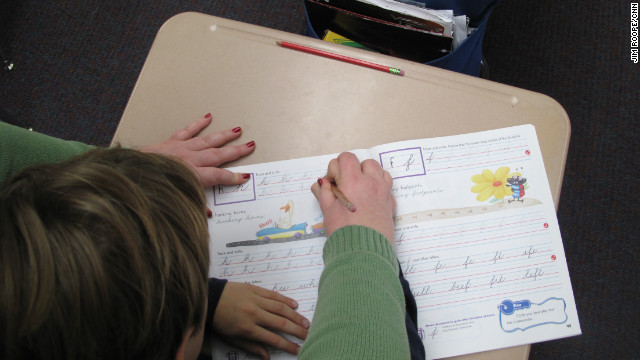 Connecting the dots between handwriting and high scores

(CNN) Penmanship. To grown-ups, the word conjures up memories of coarse sheets of paper with solid and dotted lines - and a pencil so big that you had to practically balance it on your shoulder to practice writing your letters.

For some of today’s elementary school kids, there won’t be any memories of penmanship class.  With classroom time at a premium and the common use of the keyboard, some school districts are abandoning handwriting as part of the curriculum.

But Dr. Laura Dinehart says not so fast.

Dinehart, an assistant professor at the Florida International University School of Education, was examining data collected on 1,000 second-graders and comparing it with information collected when they were in pre-kindergarten.  She and her research team expected to find that early number skills might predict math achievement and that early language skills might predict who would be better readers in second grade.  But they were surprised to find that a 4-year-old’s fine motor writing skill - the ability to form letters, numbers and shapes - was an indicator of stronger academic achievement later on.

What’s just as surprising, says Dinehart, is that the academic achievement by those with better penmanship is seen in both reading and math, and it’s reflected in both teachers’ grades and standardized test scores.  Students who received good handwriting grades in pre-K had an overall “B” average in second grade.  Their standardized tests scored above average in both math and reading.  By contrast, pre-kindergarten students who did poorly on fine motor writing tasks had an overall “C” average and below-average test scores in second grade.
END_OF_DOCUMENT_TOKEN_TO_BE_REPLACED