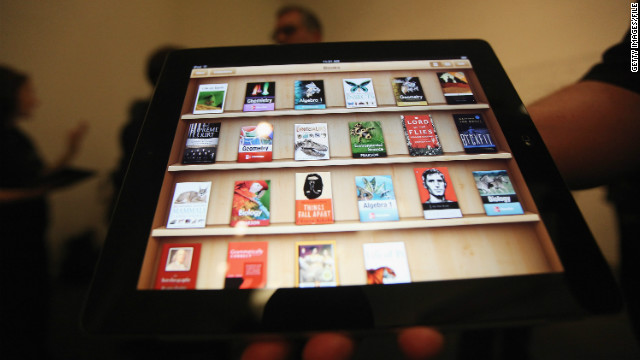 Going off the books?

The Obama Administration recently called for school systems nationwide to replace textbooks with e-readers, like iPads, Kindles and Nooks. The government hopes that the tax dollars set aside for traditional textbooks will instead be used to purchase electronic devices – and that every American student will have an e-reader by 2017.

The U.S. Department of Education hails technology in the classroom as beneficial to everything from students’ motivation to their technical skills to collaboration among peers. Electronic editions of textbooks would, in theory, be easier to update. It wouldn’t take a new edition and printing to reflect Pluto’s loss of planetary status, for example; you’d just download the updated material.

But whether this is cost efficient depends on whom you ask (and what you buy). The Federal Communications Commission (FCC), a strong supporter of digital learning, says that America spends about $7 billion on textbooks every year, which works out to roughly $90 per student across all grade levels. An undiscounted iPad costs $499, and a Kindle Fire is priced at $199.

Assuming textbook companies agree to make their content digital, it could turn out to be significantly cheaper than hardcover books. Apple is planning some digital textbook offerings for $14.99 or less (after you’ve bought the iPad). But part of the value inherent in hardcovers is the fact that they last years. Would e-readers survive lockers, bus and bike rides, pep rallies and rain? And what happens if they’re broken or stolen – how many backups do you need?

There are also concerns about income gaps: Would lower-income students be at a disadvantage if they didn’t have internet access at home? And at least one English professor, Emory University’s Mark Bauerlein, has questioned whether e-readers – with slick graphics, clickable words, and scrolling text – could promote scanning of material instead of truly comprehending the printed word.

So if the SAT is issued on paper…

It seems it’s only a matter of time before textbooks go digital. The common hope here is that however quickly that happens, it will result in a better education for our students. Otherwise, class, please open your books and turn to page 168.