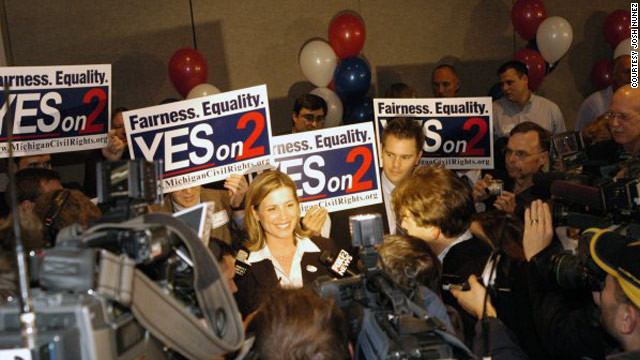 Jennifer Gratz: It's time for 'equal' to mean equal

By Jennifer Gratz, Special to CNN

(CNN) – There is a short phrase, just four words, inscribed up above the main entryway into United States Supreme Court, “Equal Justice Under Law.”

The court’s inscription brought confidence as I sat listening to oral arguments on that cold spring day. After all, how could anyone – especially legal scholars – conclude that “equal” meant unequal?

(CNN) - A Minnesota middle school student, with the backing of the American Civil Liberties Union, is suing her school district over a search of her Facebook and e-mail accounts by school employees.

The 12-year-old sixth grade student, identified in court documents only as R.S., was on two occasions punished for statements she made on her Facebook account, and was also pressured to divulge her password to school officials, the complaint states.

"R.S. was intimidated, frightened, humiliated and sobbing while she was detained in the small school room" as she watched a counselor, a deputy, and another school employee pore over her private communications.

The lawsuit claims that her First Amendment rights were violated by employees at Minnewaska Area Middle School, in west-central Minnesota, as well as her Fourth Amendment rights regarding unreasonable search and seizure.