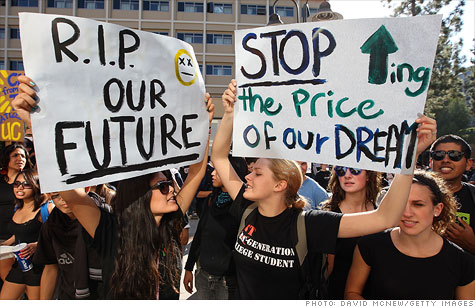 By Jennifer Liberto and Stacey Samuel@CNNMoney

WASHINGTON (CNNMoney) - With little more than three months until the interest rates on federally subsidized student loans double, students are pushing lawmakers to help them out.

On July 1, the interest rate on federal subsidized loans will double to 6.8%. That means students taking out loans for the next school year will eventually dig deeper in their pockets to pay them off.

Nearly 8 million students have subsidized student loans, which means the federal government subsidizes the interest rate for lower- and middle-income families based on financial need.

Without congressional help, students borrowing the maximum $23,000 in subsidized loans are poised to pay an extra $5,000 over a 10-year repayment period. 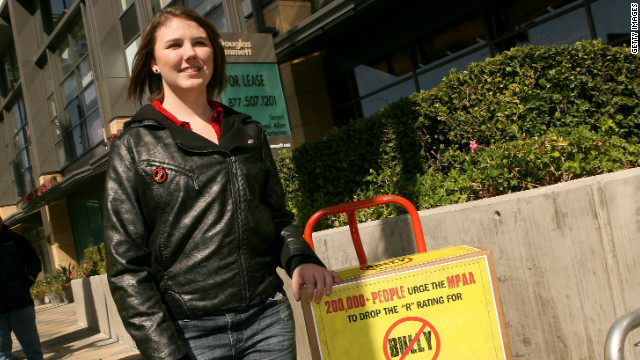 Listen to CNN Radio's podcast on the petition to change the MPAA rating for the film "Bully" from Jim Roope.

(CNN) – According to the documentary, “Bully,” 13,000,000 kids will be bullied this year in the U.S. The film follows the lives of five kids who are the victims of bullies. The Motion Picture Association of America has given the documentary an “R” rating because of strong language, but a 17-year-old bullying victim is trying to change that.

“I was out as a lesbian, and there were a lot of kids in my school who were really not OK with that,” said Butler. “They taunted me and bullied me and harassed and they slammed my hand in my locker and broke my finger,” she said.

Butler said the MPAA's “R” rating will mean the very kids who should see it, meaning middle-and-high-school-aged kids, cannot see it.
END_OF_DOCUMENT_TOKEN_TO_BE_REPLACED

EdReach: Teachers: Do you want your kids watching Khan? Or watching YOU?
Author Daniel Rezac argues that “teachers need to step up and take the Khan approach, putting their learning online.”

AJC: School lunch controversy: “Pink slime” or “lean, nutritious, safe beef”
The beef industry says treating beef trimmings with ammonia is safe for humans to eat. Critics of the food product say it shouldn't be put in front of children, and have started a petition to ask the USDA to stop using it in the National School Lunch Program.

KRDO.com: Palmer High School Yearbook Diversity Debate
Two students on the yearbook staff at Palmer High say a yearbook page was replaced because it depicted a lesbian couple holding hands. The district says the page was cut from the yearbook because of public displays of affection.

KETV7: Prom Invites Become Creative, Entertaining
Some Omaha-area teens come up with unique ways to ask for a date to the prom.

(CNN) – When I was a senior in the late 1980s, my high school brought in a woman from Planned Parenthood to talk to my health class. I remember her because she had props – a condom and a banana. Utah may outlaw lessons like that one very soon. The state's legislature passed a bill mandating that when it comes to sex education, public schools must teach about abstinence, and almost nothing else.

If the bill is signed by Gov. Gary Herbert, Utah's teachers will not be allowed to inform students about contraceptives, "the intricacies of intercourse," homosexuality, or sexual activity outside of marriage. The bill says teachers would have to inform students that, "abstinence from all sexual activity before marriage and fidelity after marriage as the only sure methods for preventing certain communicable diseases." Teachers would still be allowed to provide instruction on male and female physiology and anatomy, as well as health issues like AIDS/HIV. The proposed law does allow schools one other option: not to teach anything about sex at all.
END_OF_DOCUMENT_TOKEN_TO_BE_REPLACED