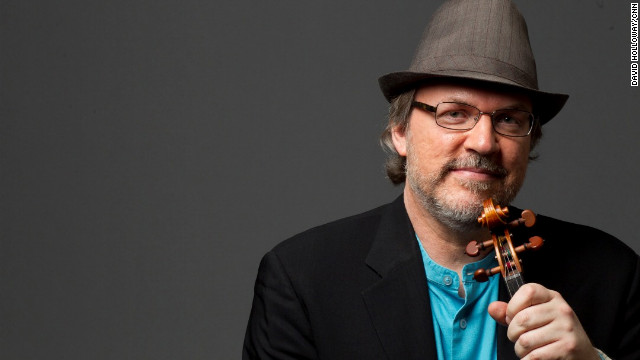 Atlanta (CNN) – Mark O’Connor is comfortable with mixing it up.

The Grammy-winning violinist - or “fiddler,” as he prefers - first gained fame as a teenage prodigy, learning at the elbows of Texas fiddler Benny Thomasson and French jazz violinist Stephane Grappelli. He’s played with rock groups, blues bands, symphony orchestras and bluegrass artists, jumping from genre to genre with assurance and joy.

Now he wants to add “educator” to his list of activities. His “O’Connor Method” of string playing builds on his interest in American music, deliberately veering away from the classical pieces emphasized in other programs.

“This kind of cross-cultural approach to music learning could have only happened here,” says O’Connor in an interview at CNN Center. “We, by nature, are curious about being Americans. We generally are interested in what other cultures and other ethnicities offer our country. And music is the perfect vehicle to express these positive attributes.”

“Students are coming to us in American classrooms from around the world, and it makes sense that musical styles are going to reflect the students whom we’re teaching,” says Kirk D. Moss, president of the American String Teachers Association.  He notes that the group celebrates a wide variety of music, even hosting an “eclectic styles” festival as part of its yearly conference.

“I think we’re seeing a lot of different kinds of music and music groups,” he adds. “That whole door is more open now than in the past.”

The gateway of music

It certainly wasn’t that way when O’Connor was growing up around Seattle in the 1960s and ‘70s.

Though he showed a tremendous aptitude for violin, guitar and mandolin - even winning a national fiddling championship at age 13 - the music teacher at his high school, devoted to choral and band, didn’t support his work in a jazz trio in which O’Connor played guitar. And the school itself, O’Connor recalls on his website, wouldn’t approve of a tour he was offered with a local community college.

“Ever since then, I have had an utter distaste for the nonsensical rules of the entrenched, and a fiery desire to plead another approach,” he writes.

After leaving Seattle, O’Connor eventually joined the jazz-rock Dixie Dregs and then moved to Nashville, where he became a sought-after session man. For the past two decades he’s been all over the map, composing for orchestras, small groups and soloists in several styles of music.

But teaching violin remains close to his heart.

“I thought that strings could be in trouble for the first time in the history of strings,” he says when describing the origins of the O’Connor Method. “The string environment has not embraced American music like the other musical departments, like wind and brass and percussion – the strings are still hanging with Mozart and Vivaldi. It’s up to people like me to bridge some of these gaps in our art.”

Music educators appreciate the encouragement, as these are both the best of times and the worst of times for their profession.

On the plus side, programs still enjoy great support. Bands and choral groups are still a mainstay at schools, and at least 150 string programs were created between 1999 and 2009, according to Moss. The recent American String Teachers Association meeting in Atlanta set a record for attendance, Moss adds.

And far from simply teaching notes and rhythms, in the last two decades music teachers have emphasized the subject’s many disciplines, says Mark Kovacs, a music teacher at Tarkanian Middle School in Las Vegas, Nevada, who attended the association’s meeting. Music is an entry point to acoustics, language, history and math, he says.

“I teach physics. I teach European history and culture. I teach French,” he points out.

“We’re required to be cross-curricular and represent all ethnicities, all belief systems,” says Katharine Mason, a music teacher visiting from Boulder, Colorado.

But there’s also the economic challenges of the last decade: budget cuts, job losses - and the need to meet testing goals in key subjects, which prompts some districts to move money away from music. According to news reports, school districts in Kansas, Texas and California, among others, have eliminated or threatened to eliminate music education positions.

Currently, 95 percent of elementary school students receive some music instruction, a figure that declines to about 50 percent at the middle school level and 22 percent for high school, according to the music education association. If cutbacks are made in the lower grades, Butera says, the pool of students in the upper grades will go down even more.

All of it keeps music teachers wary.

“In America, we use music to celebrate our grandest moments, and we use it to help soothe our hurts at moments of tragedy,” he says. “If we demonstrate we care, the students will care. We need to have policymakers understand the long-term value of not just in the school curriculum, but also for life.”

“It’s amazing how much music is central to our humanity,” he says. “We’ll go to great lengths to have music in our lives.”

Teachers remain optimistic that schools – and parents – will continue to go to great lengths to keep music in the educational curriculum. Moss says that research indicates that administrators want students to have arts experiences, and Mark Kovacs’ wife Ingrid, also a music teacher in Las Vegas schools, says that the skills learned in music class will serve them in their careers.

“Children need to have a well-rounded education to be flexible in the skills they bring into the workforce, and that’s what employers are looking for,” she says. “Even though our schools are maybe modeled after the 19th-century factory workplace, our workers now have to be much more able to take on new tasks quicker than 100 years ago or even 50 years ago.”

O’Connor believes that it will take him up to seven years to complete the O’Connor Method books. (The first book came out in 2009; Book III was released last fall.) He’s been devoting more time to playing with students, including an appearance at the Atlanta conference and a concert in New Orleans with a student ensemble. He says it can’t help but make him more committed to the cause.

“I’m living out the experience,” he says.