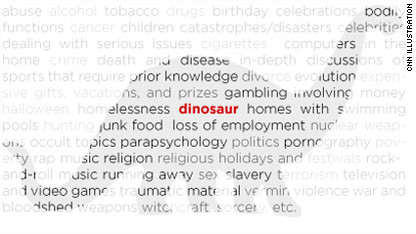 New York (CNN) – One week after New York's Department of Education drew controversy with a request to ban 50 words and references from the city's standardized tests – including “dinosaur,” “birthday” and "religion" – the department announced Tuesday that it is abandoning the plan.

"After reconsidering our message to test publishers and the reaction from parents, we will revise our guidance and eliminate the list of words to avoid on tests,” New York Chief Academic Officer Shael Polakow-Suransky said in a statement.

“We will continue to advise companies to be sensitive to student backgrounds and avoid unnecessary distractions that could invalidate test scores and give an inaccurate assessment of how students are doing," the statement continued.

The list of words New York hoped to ban from tests was made public when the city’s education department released this year’s "request for proposal" for test publishers across the country. The city is looking for vendors to revamp math and English tests for its students.

The list of words, which included “divorce,” “Halloween,” “Christmas” and “television,” attracted considerable criticism, with many alleging it was political correctness gone too far.