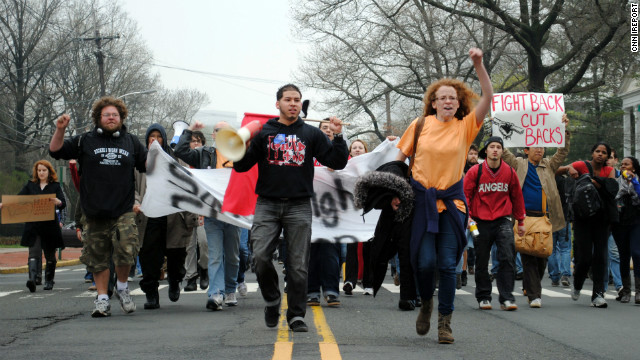 The cost of college: A balancing act

(CNN) Vice President Joe Biden and Education Secretary Arne Duncan spoke at a high school in Norfolk, Virginia, on Tuesday.  The reason:  To discuss student loans and college tuition.  If that sounds familiar, it’s because the cost of higher education has been a major focus of the Obama administration.

One of the president’s education goals is for the U.S. to have the world’s highest proportion of college graduates. America is ranked behind Russia, Canada, and several other countries in this category, according to the College Board.

But one of the effects of the Great Recession is that it sent many Americans back to school.  Attendance and tuition are up at college campuses across the country, and two priorities of the Obama administration are encouraging this college attendance and keeping tuition costs in check.

Starting in 2014, students who take out college loans will have an advantage:  Many won’t have to pay them back in full.  Part of President Obama’s 2010 health care reform law limits student loan repayment.

In the years ahead, graduates who go into the public sector (taking jobs as teachers and nurses, for instance) will only have to pay back 10 percent of their discretionary income for 10 years.  The government will forgive any remaining balance.  And in the private sector, graduates will also pay back no more than 10 percent of their discretionary income for 20 years before the remaining debt is forgiven.

So if graduates don’t have to pay back their loans in full, who covers the balance?  New loans will come directly from the federal government, which will stop subsidizing the banks that currently offer these loans to students.  The administration says that the money saved by stopping these subsidies will cover graduates’ remaining balance.  If it doesn’t, critics of the law say taxpayers will be chipping in.

The president also wants to force universities to contain their tuition -  in part by threatening to deny them some federal funds if they don’t.  Lower (or stagnant) tuition sounds great to today’s high school students.  But for many universities, tuition has increased because state funding has decreased.  Some states hit hard by the recession have actually authorized universities to increase tuition to make up for the funds that the state could no longer provide.

“There’s no one villain or savior in this,” says Pat Callan, president of the Higher Education Policy Institute.  “The cuts in higher education are incredibly deep.  The states have cut too deeply, and the colleges are too quick to turn to tuition as a first resort in dealing with the cuts.”

Callan gives the president credit for raising awareness about the rising costs of college, but he doesn’t believe the federal government has the leverage to significantly punish colleges and universities for tuition increases.

Part of the reason why is the complicated structure of college costs in the U.S.  Terry Hartle, senior vice president of the American Council on Education, calls this a “formula fight.”  He says the problem with changing the formula for federal aid “is that the terms are not very well defined.  Nobody knows what the administration means when it says ‘good value’ or ‘serving disadvantaged students well’ when it comes to higher education.”  Like Callan, Hartle credits the administration with putting a complicated issue on the agenda, but he says it’ll likely tee up an issue for the next Congress - not this one, as any significant plan will take time to hammer out.

For everyone involved, it all brings up as many questions as it does answers.  And regardless of whether some sort of compromise or impasse is reached, no one seems to know how - or if - any of this will put more diplomas in the hands of American students.