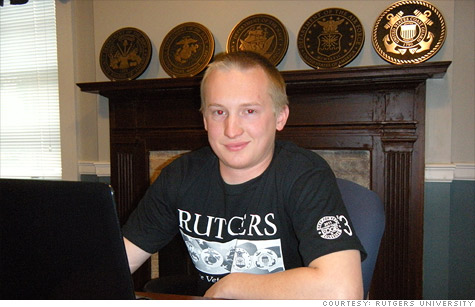 Rutgers sophomore Gary Twerdak, who served in Iraq, is one of 416,000 veterans who enrolled this semester on the Post-9/11 GI Bill. The surge created a bureaucratic backlog for Veterans Affairs.
April 5th, 2012
03:46 PM ET

The GI Bill is back, helping thousands of veterans

NEW YORK (CNN Money) - A huge wave of Iraq and Afghanistan veterans have returned to the U.S. in recent months, and that's created a surge of applicants for the GI Bill.

Demand for the program has been so robust that it nearly crippled the Veterans Administration's computer processing system, delaying benefits for vets who are trying to further their educations.

"This term was a nightmare," said Stephen Abel, a retired Army colonel in charge of Veterans Services at Rutgers, the State University of New Jersey, which currently has 1,107 students on the GI Bill.

His office created an emergency scholarship fund of $30,000 for Rutgers GI Bill students who are contending with late VA payments.