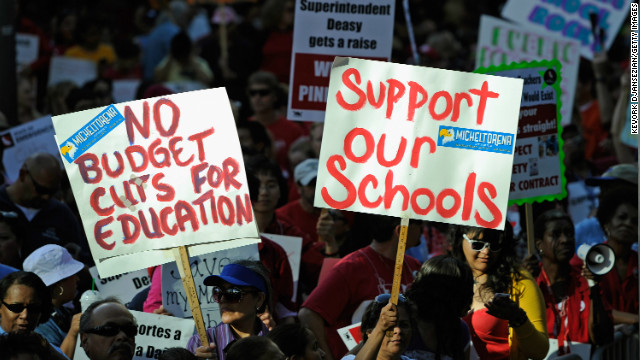 Teachers participate in an education budget cut rally and protest at Pershing Square on May 13, 2011 in Los Angeles, California.
April 17th, 2012
06:46 AM ET

(CNN) Buses, salaries, building maintenance…the costs add up. It should come as no surprise that a free public education is hardly free. An estimated $1.15 trillion will be spent in public elementary and secondary schools this academic year to educate almost 50 million students throughout the U.S. Where does the money come from?  Here are some major sources of funding for public school districts and some challenges to that funding.

In the U.S., education is primarily a state and local responsibility.  It varies, but about 10.8% of a state’s education budget is being funded by the federal government this year, according to the U.S. Department of Education. That department contributes to states via federal program grants like the American Recovery and Reinvestment Act (the “stimulus” of 2009), and Title I, which provides financial assistance to schools with a high percentage of students from low-income families.  There are also competitive grants, such as those available under the Obama administration’s Race to the Top program, that revolve around adoption of standards and assessments, teacher evaluation, and turning around low-achieving schools.  The amount of money awarded to states varies based on the states’ willingness to adopt and implement the federal requirements.  Other departments, including the Department of Agriculture, which administers the federal school lunch program, contribute education funding to states as well.

While some state administrators welcome federal help for elementary and secondary schools, critics cite the Department of Education’s requirements as their “strings attached” and view this as an intrusion of the federal government into state control over education.

Although the percentage of federal education funding to states is increasing, the largest percentage of funding for a school district – about 48% - typically comes from its state government, according to the National Center for Education Statistics (NCES).  The remainder not covered by federal and state governments is financed by local governments.

In general, state and local governments rely heavily on property taxes to finance education. In nine states, property taxes account for almost half the revenue needed to fund education.  The National Association of Home Builders estimates that the average homeowner pays property taxes of 1.04% of the value of their home, or $1,917 per year.

The problem, even in good economic times, is that home values are typically lowest in the communities whose schools need the property tax revenues the most. So states try to minimize the differences among school districts by devising formulas that calculate and distribute state funding more equitably.   In “Is School Funding Fair? A National Report Card”, experts argue that in spite of these calculations, many states “do not fairly allocate education funding to address the needs of their most disadvantaged students, and the schools serving high numbers of those students.”

Many states have other sources of revenue that help support school districts, including state income taxes, sales taxes, license fees and other targeted taxes.  In Texas, for example, taxes on gasoline, natural gas, electricity and oil production help to fund schools.  In some states, like Georgia, county voters can and have authorized local sales taxes to fund school projects.  Nevada’s gaming industry generates almost half of its general state revenue.  And lotteries have helped to fund education in 42 states, though some critics argue that most of the proceeds from lottery ticket sales never make it back to the classroom.

The housing market collapse in recent years has led to decreases in property tax collection in many localities, both as the number of foreclosures skyrocketed and as inhabited properties lost value.

Likewise, other products and services that fund education have taken a hit during the Great Recession and cost schools precious dollars.  Tourism, incomes and sales have all suffered, resulting in lower revenues to state and local governments that rely on the money.   In spite of claims that the overall economy is improving, there is little rejoicing in school districts.

The ripple effects of the poor economy have been catastrophic for some: Virginia Beach, Virginia, recently told all of its 245 first year teachers that there will not be jobs for them in the fall.  School weeks have been cut to four days in some districts in South Dakota, Wyoming and Colorado. The state of California has issued nearly 20,000 pink slips to teachers resulting from billions of dollars in budget cuts over the past four years. And as class sizes grow due to shrinking staffs, extracurriculars are being cut in some districts, meaning that sports and the arts are among the latest casualties of the lack of education funding.