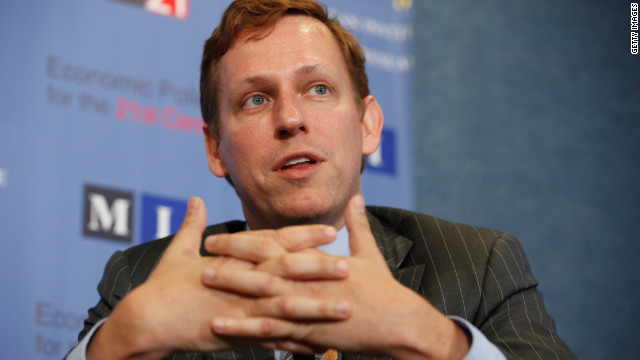 Peter Thiel believes that some of the brightest students may be better off not going to college.
April 18th, 2012
11:15 AM ET

(CNN) - Colleges and universities of all types, from for-profits to two-year colleges and Ivy League schools, have been the focus of much debate recently as many students are struggling to meet the ever-growing costs of tuition and student loan debts. But one angle has been subject to less scrutiny: What are colleges and universities providing for the most talented and accomplished students? If something we call higher education isn't the best choice for our highest achieving students, then what is its purpose?

In this regard, Peter Thiel, the billionaire co-founder of PayPal and one of the most vocal critics of higher education, believes that college classrooms are doing little to equip our future CEOs, innovators and industry leaders. Thiel has a point. Some of the brightest students might be better off not going to college at all, being forced to take classes in which they have no interest and leaving with burdensome student loan debt.

Last year, Thiel took things into his own hands and started the "20 Under 20 Thiel Fellowship," a program that brings together the most enterprising students younger than 20 and offers them a $100,000 grant to skip college and explore their own research and entrepreneurial ideas. Under the tutelage of investors, scientists and like-minded industry tycoons, students are able to develop connections, court investors and promote their businesses on a level that Thiel says colleges cannot provide.