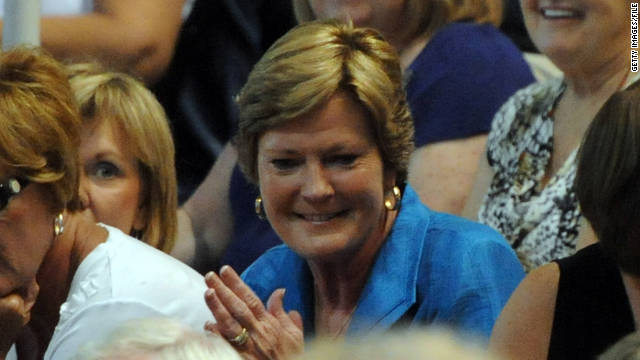 (CNN) - Eight months after revealing her diagnosis with early-onset Alzheimer's, the head coach of the University of Tennessee's women's basketball team announced she was stepping down Wednesday.

Pat Summitt, who led the Lady Vols to eight national championships and whose 1,098 wins are the most in major-college basketball history, will remain involved in mentoring players and recruiting as the team's head coach emeritus, the university said.

"I've loved being the head coach at Tennessee for 38 years, but I recognize that the time has come to move into the future and to step into a new role," Summitt said in a statement released by the university.

Associate head coach Holly Warlick, an assistant on the team's staff for 27 seasons, has been named Summitt's successor, the university said.

"If anyone asks, you can find me observing practice or in my office," the 60-year-old Summitt said. "Coaching is the great passion of my life, and the job to me has always been an opportunity to work with our student-athletes and help them discover what they want. I will continue to make them my passion. I love our players and my fellow coaches, and that's not going to change."

Summitt said in August that her pre-diagnosis symptoms included asking her son the same question repeatedly, but said that she intended to keep coaching.