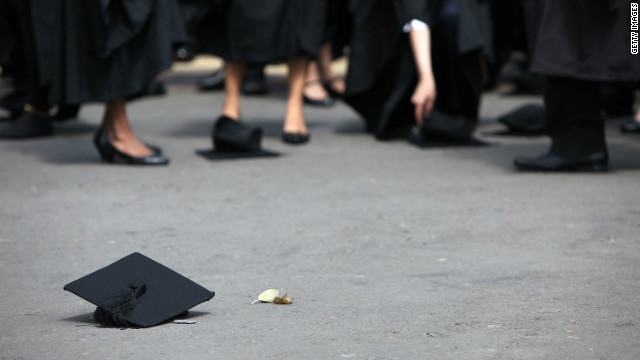 (CNN) - The District of Columbia's 2011 high school graduation rate is down 20 percentage points from 2010. Utah's rate dropped from 90% in 2010 to 75% in 2011 - 15 percentage points. And Georgia's 2011 rate dropped 13 points from the year before. These significant drops aren't because of performance. It's all in the math. States are changing the way they figure out graduation rates.

The new formula is a bit of simple division: The number of current graduates is divided by the number of them that sat in a ninth-grade classroom for the first time four years earlier. It’s called the “four-year adjusted cohort graduation rate,” and it requires states to keep track of every student who enters ninth grade and follow them wherever they end up - at graduation or elsewhere.

In 2005, governors from all 50 states signed on to use this new formula. Before then, states used different ways to measure graduation rates.

Most states were calculating the graduation rate using the "leaver rate," which includes a formula that does not necessarily account for every possible way a student could leave the system. For example, some students who said they would transfer to another system never enrolled in their new district. Those students are often not counted as dropouts by either school district. Also, the leaver rate counts all graduates, even students who go to senior prom five or six years after their first day in high school.

Kentucky recently moved from a leaver rate calculation to the averaged freshman method, which calculates the percentage of freshmen who graduate in four years, but relies on estimates to determine the number of ninth-graders. Lisa Gross, the Kentucky Department of Education communications director, told CNN, “We’re using that to transition towards the cohort rate,” which Gross said is more reliable than the other methods. The state experienced a seven-point drop when it recalculated graduation rates in 2010. Gross told CNN that the rate is expected to dip again when the state uses the cohort rate for the class of 2013. Kentucky’s graduation rates between 2009 and 2010 would have improved slightly had the state been using the averaged freshman calculation for both graduating classes.

Even though the new formula seems simple, what's behind the new equation could lead to more work by school and state officials. States must now track individual students, instead of using estimated student numbers.

Georgia switched from the leaver rate to the cohort rate for its 2011 calculation. Matt Cardoza, director of communications for the Georgia Department of Education, told CNN that the new standards require better documentation. He said, “In some districts, where you saw a difference, it was because of how students were coded. We didn't have the ability to track by [student] before.”

Under the four-year cohort, schools now have to account for all students. Students who leave a school are counted as dropouts unless the school can document where they went. A student who transfers to another school still counts as part of the original cohort unless the school can document that the student enrolled elsewhere. Homeschooled students must be registered as such.

Some states, including Georgia, were including students who graduated in five or six years instead of the traditional four. Under the new cohort rate method, those students are not included in the graduation calculation, even though they aren't considered dropouts.

D.C. Schools Chancellor Kaya Henderson said in a statement, “With the new calculations, we have a clearer understanding of the work we still need to do, and the public has a more reliable way to hold us accountable.”

Georgia school officials aren't fazed by that state's 13-point drop, either. Georgia's Cardoza says the state is seeing an upward trend in graduation rates. He told CNN, "For us, [the four-year cohort calculation] is more accurate. [2011] is a baseline year. We will improve no matter what the formula is. We improved under the old rate, and we will continue to improve."

Not every state experienced a severe plunge under the new math. Michigan state officials had braced themselves for a big drop, but the state's rate fell only by 1.6%. The Detroit Free Press quoted Jan Ellis, a spokeswoman for the Michigan Department of Education, who said, "Michigan has been able to raise expectations of rigor in high school without resulting in the increase in dropouts predicted by the skeptics." Some districts in Michigan did experience major drops - as much as 25 percentage points - while Detroit's rate dipped only 3 points to about 60%.

Judy Park, Utah's associate superintendent of education, says that while the cohort method encourages schools to keep better track of students, it could have a negative effect on some students. The Standard-Examiner quoted Park, who said, "If you only look at that graduation rate and ignore all of those other students, (such as) students who complete the GED and special education students who maybe did not earn a diploma, but who did not drop out, then I think it's a disservice to those students." Before 2011, Utah did not count special education students with severe mental disabilities or those who left early for technical training or college. Those students are included in the new cohort calculations.