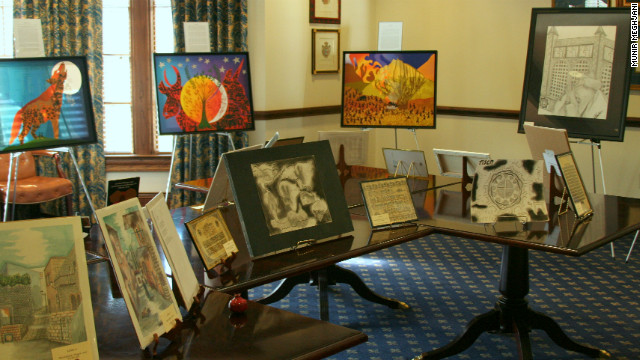 Their efforts bear tragic relevance. Last month, an attack at a Jewish school in France left four people dead. In California, a Muslim woman was beaten to death in her home and left with a note that read, “Go back to your country.”

The students’ work didn’t come without challenges. Their goal was to illustrate unity on campus, but not everyone believed in their vision.

“A lot of people were skeptical, that maybe people couldn’t handle it or understand it,” Abdulla said. “Knowing that our cultures are different, the way we work is different, a lot of people weren’t sure if we would be able to take the relationship to the next level, but we had to convince them that something of this magnitude needs to happen.” 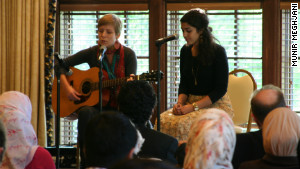 Students perform songs in Arabic, Hebrew and English at the interfaith art gala at Emory University.

At the gala, skepticism didn’t slow them down at all. Students who helped plan the event moved around a room with energy and excitement. Alexis Berkow, president of Hillel, lit up when she described what it was like for the students to plan the gala together.

“We had a group of Jewish and Muslim students working together, and I think that was the most amazing experience, spending time with these people that you wouldn’t normally spend time with. You realize you’re exactly the same, you’re all going to college and you have a lot of the same goals, and it makes the other people see that you are the same, too,” Berkow said.

Comedians Dean Obeidallah and Scott Blakeman were invited to perform at the gala. They kept guests laughing and ended their performances by stressing the importance of promoting peace through dialogue. 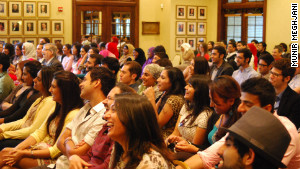 Attendees of the gala listen to comedians Scott Blakeman and Dean Obeidallah perform.

“When I go to the synagogue and I look in the prayer book, it says seek peace and pursue it, it talks about embracing all, and that’s what to me, not only being Jewish is, but what the state of Israel is supposed to be also. I hope that will happen,” Blakeman said.

For Abdulla, who graduates in May, this is where the work begins.