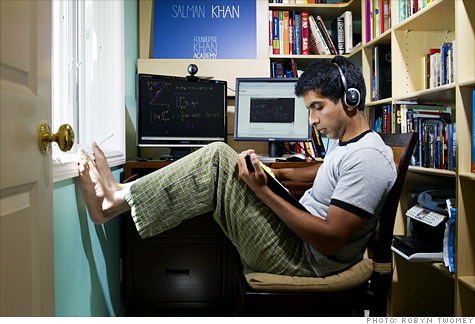 Salman Khan started the Khan Academy from a converted walk-in closet in his Silicon Valley home. His website was named the 2012 Webby Winner in the Education category.
May 4th, 2012
07:51 AM ET

(CNN) - Khan Academy took the top prize for education in this year's Webby Awards, the International Academy of Digital Arts and Sciences announced on Tuesday. TED Talks won the Webby People's Voice Award. The academy will dole out the awards for Internet excellence on May 21. In contrast to the long speeches you see at award ceremonies like the Oscars, each winner will be allowed to say just five words – shorter than most tweets.

And the nominees in the category of Education Websites are....

Common Sense Media provides parents and educators information about the media-rich world we all live in. The non-profit organization says that students spend more time with traditional and digital media than with families or teachers. For parents, the site offers reviews of many types of media, from books to movies to websites.

The site has a section for educators, which includes online training and teacher resources on Internet safety, cyberbullying, and violence in the media. To access the training portion of the site, a teacher must register, but the webinars and videos are cost-free. Common Sense Media does charge for in-person professional workshops for schools and districts.

Entries recently closed for the second annual Google Science Fair, a science competition for middle and high school students from all over the world. Yes, the Webbys nominated a contest for their contest.

Students perform experiments under Google's guidelines, and then use Google Sites to build a website that displays the methods and results of their experiments. The site includes an educator toolkit so that teachers can guide students in their submissions, as well as activity ideas and lesson plans.

The projects are judged by a panel of teachers and scientists. Prizes include scholarships, tech devices, and opportunities to visit unique scientific sites around the world including a Galapagos research facility, CERN's physics lab in Geneva, Switzerland and Google's research facility in Geneva.

President Obama talked with some of last year's participants and winners at the White House Science Fair, where students demonstrated projects from different science competitions, including Google’s. Last year’s projects included studies on the effect of marinade on carcinogens in chicken, indoor air quality, and ovarian cancer treatment.

The videos went viral, so Khan quit his day job and started the Khan Academy. It isn’t just about math anymore; the site boasts 3,000 videos on various topics. All the videos are educational; Khan Academy creates them for use in the classroom and for homeschoolers. Some educators who use a flipped classroom model, where students watch videos at home and then do "homework" at school, use Khan's videos for their content.

Unlike a traditional lecture, only Khan's voice appears on the video, not his body. What is seen are neon-colored hand-drawn diagrams, equations and other content on a digital blackboard. Microsoft co-founder Bill Gates says he uses Khan's videos to teach his kids.

My Garbology is about the study of garbage – how much there is and what can be done with it. A flash game on the home page asks you to choose what you would do with a variety of everyday trash – banana peels, an old t-shirt or a plastic bottle. The interactive is interspersed with facts like how much water is needed to grow the cotton for one t-shirt (250 gallons) or how much trash the average American throws away each day (more than four pounds). At the end of the game, there is a certificate and a pledge related to the activity that can either be downloaded as a PDF or published to Facebook.

The main activity is appropriate for most ages; even older kids and adults will likely learn something new to keep them interested. The site also has other conservation activities for teachers, students and families. The teacher resources identify appropriate grade levels for the activities. This site could be useful for a unit on environmental science.

TED Talks are short lectures given by renowned thinkers which follow the nonprofit’s motto: ideas worth spreading. TED stands for Technology, Entertainment, Design. The non-profit hosts two annual conferences and challenges visionaries to deliver a meaningful talk in 18 minutes or less. The site encourages visitors to repost and share the videos with others.

The site tags more than 100 of the site’s 900 videos as education. Among the most viewed of all videos is Ken Robinson's TED Talk on how schools kill creativity. In this video, which has been translated into 54 languages, Robinson says, “all kids have tremendous talents and we squander them, pretty ruthlessly.... My contention is that creativity now is as important in education as literacy, and we should treat it with the same status.”