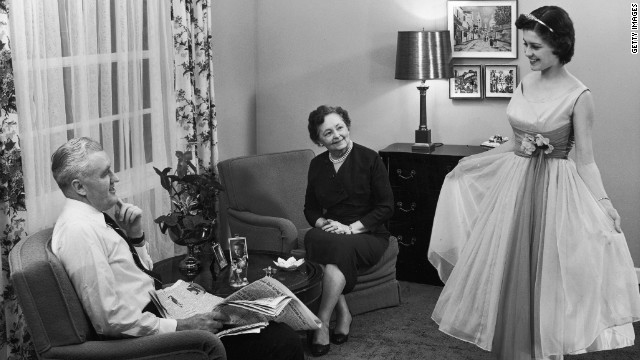 What happened to modest prom dresses?

(CNN) The sparkly, sequined prom gowns that many of us remember from the 90s – like the Glamour Shots that sometimes accompanied them – might not have been the prettiest.  But most were pretty modest compared to what some young promgoers have been squeezing themselves into this year.

At David’s Bridal, there’s a prom dress line categorized as “Sexy,” and it’s accounting for about 35 percent of the retail chain’s sales, according to the Wall Street Journal.  Low-cut backs, high-cut hemlines, and skin-showing cutouts define the style.

Clothing retailer AMIClubwear, self-described as “the positive place for girls,” has options that would positively trouble more conservative fathers.  The company throws revealing and tight styles into its mix of party dresses.  Factor in the racier options at other retailers like promgirl.com and Jovani, and you have a veritable runway of the risqué.

There’s no doubt that the dresses offered have broad appeal to some of today’s high school students; after all, demand drives the market.  But their schools are implementing dress codes to ensure certain garments aren’t worn.

For example, anything that shows off the midriff, is too low-cut (in either the front or the back), or is see-through will not been seen through the doors at Milford High School in Massachusetts.  The line is drawn at the bust line at Alabama’s Opelika High School:  “If flesh touches flesh” below that point, the prom dress code says, “the dress is inappropriate.”  It also forbids midriffs as well as slits that rise more than three inches above the knee.

Women aren’t singled out in this, either.  Some dress codes mandate dress shoes on young men’s feet, so forget about funning up a tux with Chuck Taylors.  And dress shirts are also required to be worn at all times during some dances, which could seriously disappoint our male fans of Jersey Shore.

But the blame extends well beyond Pauly D and JWOWW.  Everything from The Real Housewives to Desperate Housewives – from Lindsay Lohan to Lady Gaga – is having an influence.

Video: No prom in this skimpy dress

“This whole idea of the red-carpet obsession and getting dressed up is at the forefront of our culture,” says Catherine Moellering, who tracks prom trends and is the executive vice president of ToBe Report.  And when Jennifer Lopez strides the red carpet with a neckline that reaches the top of her stomach, admiring viewers of all ages are going to notice, and some are going to try to copy the look.

There are alternatives for today’s students, of course.  Rather than looking to the present, there’s always the notion of nodding to the romantic past.  Practically every tuxedo set does this in some way.  And there are a number of retail locations that sell vintage or vintage-inspired dresses that can be every bit the show-stopper as something with less coverage.

While '90s fashions may best be left where they are, '50s glamour holds great allure for students like high school junior Erica Beebe, who praises the modest elegance of icons like Grace Kelly and Audrey Hepburn:  “Grace and Audrey always left something to the imagination,” Beebe writes at postbulletin.com.

“I believe it is that sense of modesty that my generation is often missing, and I know I am one of the offenders.  In an age where even the most intimate aspects of life are posted on social networking sites, privacy has no value.”  Beebe goes on to blame the absence of modesty and an unquenchable thirst for attention as the driving forces behind scandalous prom dresses.

Others blame a shift in parenting values – the notion that our parents wouldn’t have let us go out in certain outfits, but it’s all right if our kids do.  That’s part of the reason why Houston Chronicle blogger Mary Jo Rapini posted a list of tips to help parents guide their teenagers’ choices.  Her advice includes explaining why a dress may be inappropriate, encouraging teenagers to make different choices, allowing them time to mull it over and vent to friends…and possibly being prepared to put your foot down if all else fails.

It’s understandable why promgoers want to have the final say in what they wear, whether that’s altered by a parent, a friend, a rule or a tailor.  At the end of the complex debate, though, is actually a very simple choice.  It’s between the elegant and the suggestive, as the two don’t often coincide.