It only takes a minute to change a student’s life 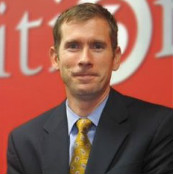 Editor’s Note: In honor of Teacher Appreciation Week this week, we’re asking our colleagues at CNN to share their stories of teachers who have inspired them. Scott Burkey is a senior project manager at CNN.

(CNN) - We moved several times when I was in junior high and high school. Each time was more difficult than before. The first time we moved I was 12 and I remember the process of “checking out” of school in the middle of the day before we moved. What happened to me on that one day when I was 12 has had such an impact on me that I’m still talking about it three decades later.

One of the teachers at my junior high school was a geography teacher named Bill Wheaton. I thought it was cool that Mr. Wheaton was missing part of one of his fingers. I imagined it to have been lost in a grizzly battle in Vietnam or in a knife fight with a vicious street gang. I spent many classes daydreaming about how Mr. Wheaton had defended a whole town against invading forces and lost part of his finger in the bloody battle that ensued. It’s silly now to think back about it. But it’s okay because I’m not an overly-serious person.

What Mr. Wheaton did for me wasn’t just in providing daydream material but it was a decision he made on my last day in that small junior high school in the early 1980’s. He made a decision that took him two minutes to make and that impacted my life for many years.

As it happened, I went by to see Mr. Wheaton to get his final signature on my check-out slip and had to interrupt him in the middle of teaching another class. He signed my check-out slip and I left the classroom. As I walked down the hallway, check-out slip in hand, I heard Mr. Wheaton call me from the door of his class room. I returned and stood in front of him. He took me by the shoulder, looked me straight in the eye and said, “I want you to know that you can do anything with your life that you put your mind to. Good luck to you, son.”  He then shook my hand and returned to his class.

I walked to the next classroom to get the next signature on my check-out slip not knowing that my life had been changed forever by the encouraging words of this man, this teacher. Not just any teacher but an educator that cared enough to take an extra minute, to call a student back into his presence, to change the life of that student forever.

Now, I haven’t always done what I’ve wanted to do with my life. Certainly, over the years, I’ve done things in my life that I would gladly change if given the opportunity. But, many times I’ve called on the words of Mr. Wheaton and decide to “put my mind to” something for the better. Simple words came from a humble man over 30 years ago.

A childhood friend of mine from that junior high school is now an educator in my hometown. Monya agreed to help deliver a letter to Mr. Wheaton that I wrote to him a couple of years ago. She told me that he was proud to receive it and glad that he had an impact on me though I’m sure that in his senior years he doesn’t likely remember which skinny little kid I was.

But I remember what he did very well.

Because I remember what he said, and it has meant so much to me,  I will continue to look for opportunities to share an encouraging word with other young people like that teacher did with me on that day.

Thank you, Mr. Wheaton, and thank you to the teachers that will stop to say something encouraging to a student today.