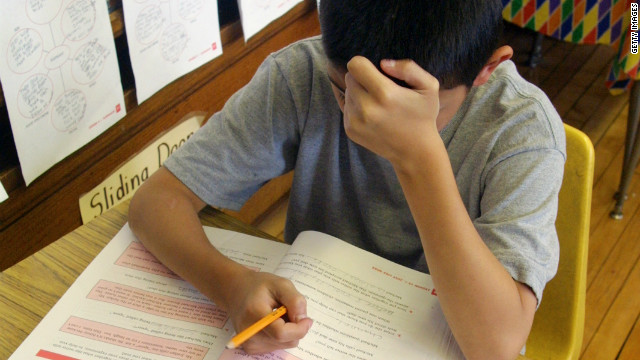 (CNN) - The Florida Department of Education has released the results of its most recent statewide standardized tests, the Florida Comprehensive Assessment Test  in reading and writing.

Results for the FCAT reading tests for grades nine and 10 showed that 52% of those students were reading at or above grade level, virtually unchanged from 2011, according to the Florida Department of Education.

This year’s writing test results, however, revealed a far different story. Writing scores have plunged. Last year 81% of fourth-graders scored a 4 (at grade level) or higher on a 6-point scale. This year, only 27% did.

A 4 used to be the score that demonstrated that a student was performing at grade level, but in an emergency meeting last week, the state Board of Education decided to revise that benchmark to a 3.

The board said it didn’t want to lower grading standards but took action while the state looks for reasons why writing scores dropped so much this year.

Possible reasons for the plunge

Critics say that changes to this year’s writing test – changes the state says were necessary to align expectations with more rigorous standards – were pushed through too quickly, and that neither teachers nor students were prepared.

"The dramatic drop in writing scores shows that the system is a failure," said Andy Ford, president of the Florida Education Association. “The FEA has always opposed and questioned the overreliance on standardized testing,” he wrote on the union’s website.

But state officials say that the system is in transition as it adjusts its expectations of students.

In the state’s press release, Education Commissioner Gerard Robinson said, “We are asking more from our students and teachers than we ever have, and I am proud of their hard work. … As Florida transitions to higher standards and higher expectations, we can expect our assessment results to reflect those changes."

In this most recent FCAT 2.0 writing exam, there was greater scoring emphasis on “writing conventions” - grammar, spelling and punctuation - as well as “the quality of details”  in students’ essays.

On its website, the state DOE warns against comparing this year’s scores with the previous year’s because of the differences in grading the tests.

Why the scores matter

The FCAT writing test is a 45-minute assessment where students must write on an assigned topic. Fourth-graders write stories on a given subject, while eighth- and 10th-graders write persuasive essays on specific topics.

The test results are used for student and teacher evaluation. Under the state’s “value-added” model for teacher performance, a teacher’s job performance is based, in large part, on students’ testing scores. Grade promotion is also based on FCAT results. In addition, FCAT scores are a factor in determining school grades and whether a school makes Adequate Yearly Progress.

FCAT results are watched by educators and political leaders around the United States. Other states have looked to Florida’s testing to develop their own accountability systems in response to No Child Left Behind and Race to the Top mandates.

But there has also been a backlash in recent years against what has become known as “high-stakes testing.”

Read the story and listen to the podcast: The high stakes of standardized tests

Florida’s attempt to “grade on the curve” supplies more ammunition for critics of standardized tests, who say that states have come to rely too much on them and that they produce little evidence of learning.

The recent FCAT writing scores and the discussion around what they mean have added more fuel to the fire in that debate.