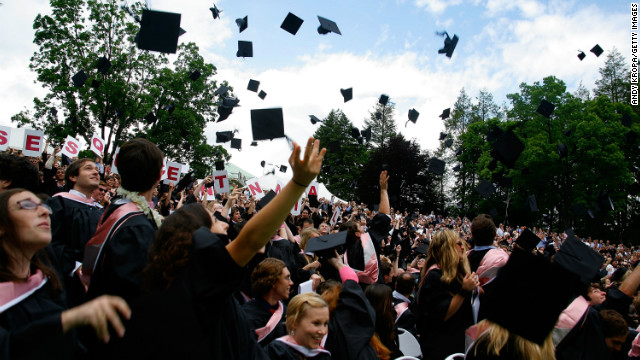 (CNN) Graduates at both the high school and college levels can easily get lost in the complexities of money management, planning and work ethic. But let’s start with the big one. When it comes to common slip-ups by recent graduates, social media are a virtual black hole.

By now, seniors have heard the warnings – that what they post online is rarely, completely private. You know how you wouldn’t want embarrassing photos or information about your last breakup appearing in a school yearbook? Well, think of Facebook and Twitter as a yearbook for the entire world. And if you're a college graduate whose profile picture reveals a funnel, a frothy drink, and the Jersey Shore (or Lake Havasu…or Daytona Beach…or a Caribbean cruise), there’s a possibility that the company you want to work for will see it.

But while some Facebook pictures and wall posts can be taken down, students won’t get the chance to take down their public tweets. They’re exactly that – public – and they’re now scheduled to stay that way forever.

The Library of Congress is keeping a Twitter archive for posterity. And no matter who you are, how old you are, or what you’ve ever written about in 140 characters or less, every single public tweet EVER is being archived. Does that mean that a potential employer/spouse/child/admissions officer will be able to read what you wrote back in 2009? Yes. Can you take your tweets back? No. The only thing you can do is make your future tweets private – a setting that will keep them from being archived. But everything that’s ever been publicly shared will stay that way.

Social media aren’t the only danger zones for graduates, of course. Another potential stumbling block is the coveted summer break. Between the ninth and tenth grades, you might've kicked back, relaxed, worked only when needed (or convenient), and ruled the pool. But recent college graduates who stay in that pattern are almost certain to lose whatever jobs are available to those who started their search before they even donned a cap and gown.

And if you’re leaving high school for higher education, you don’t want to be lost when you land on campus. You’ll have to learn how to register for class. Larger campuses will have bus routes you won’t know, and there’s a lot of stuff in your bedroom and your bathroom at home that won’t be included in a dorm. So taking some time to get the lay of the land at college, to do some shopping in advance, or just to work up a transition plan will pay off – and give you more time to go to ice-cream mixers while your dormmates go to Target.

Got a few bucks? Save it. Any college student can tell you that you go through cash faster than you plan to. From laundry, for which many students will have to pay for the first time in their lives, to late-night snacks when the dining halls are closed, you’re going to need funds. And you don’t want to rack up credit card debt in addition to student loans.

In fact, if you can get out of college without any credit card debt, you'll be ahead of the curve. One mistake graduates make right out of college is diving into debt they may not need. Even if they're fortunate enough to land a job right out of school, a bad idea is to buy a new car that's not needed. Why? Because having a car payment in addition to rent is like having two rents.

A good idea before you buy or rent or lease anything: Understand your income. A starting salary of $36,000 does not mean you’re going to get a check for $3,000 a month. Uncle Sam’s gonna take a chunk of that; your state may take a cut as well; your employer will probably need you to kick in part of your health insurance coverage. So plan on getting a roommate or two and cycling through a few paychecks so you have a sense of what you can afford before you actually go shopping.

And don’t rule out taking an internship or a position with a low, entry-level salary. With the economy where it is, graduates often have to temper their expectations. “Your first job should give you knowledge and experience that will serve as a building block to your dream job,” writes Scott Sholtes of AlumniAgent.com. Don’t think your education is wasted because you can’t start off at $60,000; you just have to be patient – and often do some grunt work – to get there.

And speaking of grunt work, be ready to do it. Whether the next step is college, trade school, or entering the workforce, there are going to be more people and more competition. Students who are ready to take on the world may also have to take on the cleaning or the scheduling or the sorting or the researching. One of our news anchors got her start in journalism by emptying trash cans at a radio station. A couple others scrolled a TelePrompTer and handed scripts to producers. Aspiring private pilots often wash airplanes; aspiring park rangers often collect tolls. It’s not glamorous, but it helps folks get where they want to go.

In fact, glamour rarely factors in to life immediately after graduation. Sure, a tiny fraction of athletes may go pro, and a tiny fraction of performers may land a role somewhere. But for 99.9 percent of graduates, success comes later. Planning on that can go a long way in smoothing out the road after graduation, and it makes for a better success story anyway – make no mistake about that.