(CNN) - Each spring, I monitor the list of commencement speakers at our nation's leading colleges and universities. Who is chosen, and who is not, tells us a lot about academia's perception of the most important voices in America.

It's not often that elite universities honor military service members with commencement addresses. Gen. Dwight Eisenhower once spoke to a graduating class at an Ivy League university and remarked, "Your business is to put me out of business." So I applaud Tufts University for inviting Greitens.

He is not a household name, but he should be. The 38-year-old Rhodes scholar and humanitarian worker turned U.S. Navy SEAL served multiple tours overseas fighting terrorist cells and received several military awards. Today, he is the CEO of the Mission Continues, a nonprofit foundation he created to help wounded and disabled veterans find ways to serve their communities at home.

To the graduates of Tufts, Greitens issued a unique challenge, one rarely heard at commencements today: to sacrifice, to serve one's country and to live magnanimously. He called students to think above and beyond their own dreams, their own desires, and to be strong. Aristotle called this megalopsychia, greatness of soul, and considered it one of the greatest moral virtues.

When ReShonda Tate Billingsley let her daughter open an Instagram account, the Houston novelist made clear to her what would be appropriate to post to the picture-sharing site.

So the mother wasn’t impressed when she saw a couple of weeks ago that the 12-year-old took a picture of herself with unopened alcohol bottle from her father’s bar and posted it with the caption, “Wish I could drink this vodka.”

She not only temporarily banned her daughter from Instagram, the mom took a picture of her daughter holding a sign announcing her punishment (but not showing most of her face). She posted it to her daughter’s Instagram account to chastise her and to the mother’s own public Facebook page, hoping to persuade other parents to monitor their kids’ online activity.

“Since I want to post photos of me holding liquor, I am obviously not ready for social media and will be taking a hiatus until I learn what I should and should not post. Bye-bye,” the sign read.

Within hours, more than 10,000 people shared Billingsley’s Facebook post, and hundreds of others shared it on Twitter. She says she didn’t expect so much attention, but she thinks it’s made the lesson more effective.

“She saw how this picture has gone viral, but … now she sees that if it had been the picture of vodka that went viral, it could have ruined her life,” Billingsley said Tuesday. “It’s vodka today, but it could be underwear five years from now if this isn’t nipped in the bud (and she doesn’t learn) the consequences of posting on social media.”

Romney told members of the Latino Coalition gathered at the U.S. Chamber of Commerce that millions of American children were "getting a third-world education," adding: "America's minority children suffer the most. This is the civil rights issue of our era."

The GOP hopeful said low-income and disabled students should be able to choose to attend any public or charter schools in a voucher-like program, with federal aid following them to their chosen schools.

Campaign advisers told reporters the plan would not require new federal spending. They did not discuss the plan's effect on schools largely supported by that same federal aid. 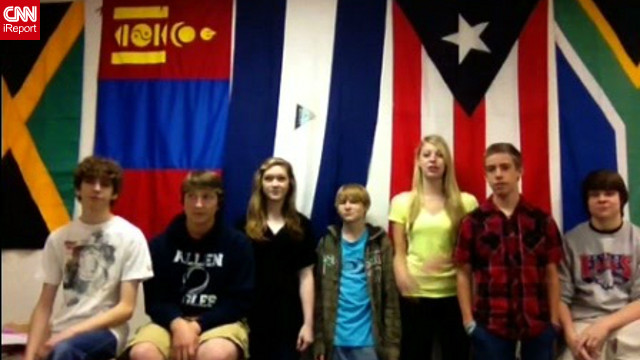 By the Schools of Thought editors, CNN

(CNN)– Editor's note: CNN's Schools of Thought and CNN Student News asked our audiences to send us iReports during National Teacher Appreciation Week. Here are some of the best submissions we received. Enjoy!

Students in Mr. Balch's world geography class in Allen, Texas say they learn a lot from his teaching.

Faith and Parker want to thank Mrs. Bachman for pushing them into working hard.

Veronica studied in the Philippines and says that Miss Manal, and Miss Regner inspired her to learn science and Filipino at school, while Miss Umlas and Miss Palabrica are excellent teachers who Veronica has met online.

Three students from Green Bay, Wisconsin Mrs. Gast is their favorite, and they love her education games, including "preposition pictionary".
Our favorite teacher

Cody expresses his appreciation for his homeroom teacher, Mrs. Clapham.

St. Simons Island, Georgia teacher Mrs. Murray "is always there for you and never lets you down," according to one of her students.

Jaiyah's favorite teacher is Ms. Marker because she teaches science.

(CNN) - Seniors at Kenowa Hills High School in western Michigan thought a mass bike ride to school was a sweet sendoff for the last day. Police escorted the ride and parents lined the route. The Walker, Michigan, mayor brought doughnuts.

But principal Katharine Pennington didn't know. She said the ride was dangerous, tied up traffic and prevented staff from making it to school, CNN affiliate WOOD-TV reported.

She sent more than 60 students home after the bike ride yesterday. Soon-to-be graduates were banned from participating in the senior walk - a traditional final walk through the school's hallways - and some were told they wouldn't be allowed to walk at graduation, a decision that was later reversed. Students told CNN today the senior walk was rescheduled, too.

Pennington released an apology on Wednesday, along with the superintendent, after parents and students flooded a school board work session with complaints.

“Yesterday, I made a mistake and sincerely regret my actions. Did I overreact? In retrospect, of course I did," Pennington's statement said. "I apologize to the students, their parents, and the community for a reaction that blew this incident out of proportion and called into question the character of our students. Our senior class has demonstrated leadership, unity and school pride throughout this school year. My actions and emotion overshadowed what should have been a very positive senior activity. I have learned much from this experience and do not consider myself infallible.

“I now applaud the students for their foresight in contacting the police department to ensure the safety of their senior surprise. I only wish the police department or others who may have known about this would have let us in on the surprise but, of course, it wouldn’t have been a surprise had we known in advance."

END_OF_DOCUMENT_TOKEN_TO_BE_REPLACED

Australian school builds community despite vast distances in the Outback

Alice Springs, Australia (CNN) - In 9-year-old Georgia Auricht's classroom in the rural Australian bush town of Kulgera, there's only one other student - her older brother, Jake - and their teacher is 170 miles away.

"I love learning. I enjoy the math a lot and sometimes I like my times tables and I like a little bit of language too," said Georgia.

From the wide expanse of scrub bushes to the cows that wander onto the dusty roads, there's not much civilization in this part of Australia. Those who choose to live in the outback adapt to the isolation. Yet the community of a local school still brings them together, even from a distance.

The small School of the Air building in Alice Springs, Australia, caters to elementary and middle school students as much as 800 miles away, covering an area twice the size of Texas or ten times the size of England.

Georgia's father, Owen Auricht, is the officer in charge of Kulgera police station. His territory is so expansive and remote that it can take him five hours to get to a car accident in his jurisdiction.

Growth of the Internet has made distance learning much more common now than just a few decades ago, when he took classes at the School of the Air.

"Basically it was a radio the size of a six-pack of beer," said Auricht. "It was a little metal box that was linked up to an aerial on top of a schoolroom."

Auricht received all of his books via mail, generally from air drop, at the beginning of the school year. Every few weeks, he would mail his written work and tests to his teacher in Alice Springs to be graded.

Today's School of the Air students receive a complete IT setup including a satellite dish, computer, printer and scanner. They can see their teacher and the other students on the screen during classes, leading to more classroom interaction.
END_OF_DOCUMENT_TOKEN_TO_BE_REPLACED