A San Antonio school district has sided with the former, though not without some debate. The end result is that Northside Independent School District will begin the 2012 school year by distributing ID cards enabled with radio frequency identification (RFID) chips throughout three schools and to 6,290 of its students.

The main idea here is to be able to determine where any given student is at any time during the school day. That's the main idea. The other part of this is that it could help the school district net hundreds of thousands - if not millions - of additional dollars. But more on that in a moment.

The chips will be able to detect when a student boards a school bus and where in the school they are located, though it won't work outside of school grounds.

"Parents expect that we always know where their children are, and this technology will help us do that," said district spokesman Pascual Gonzalez. "This way we can see if a student is at the nurse's office or elsewhere on campus." The San Antonio Express-News reports that Gonzalez also said the only people who can access the tracking data will be school administrators.

The ACLU, though, has previously voiced strong objections to chipping students, pointing out that these "insecure" card readers have been copied "with a handheld device the size of a standard cell phone that was built using spare parts costing $20." Equipped with one, they argue, it would be simple for someone to track a student. The group says an even larger concern is that chips could also be copied, allowing would-be kidnappers to take a child off campus while the duplicate chip continues to tell RFID readers that the child is safely at school."

Read the full story on HLNtv.com 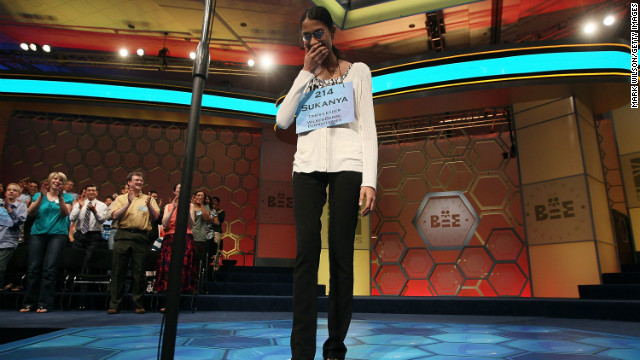 (CNN) It’s not always easy to watch: young people given increasingly difficult words to spell, standing uncomfortably under lights and cameras, their faces strained or frozen under pressure, their parents watching helplessly from their seats in the audience… They’re all components of the tournament that crowns America’s best speller.

If you look back at the National Spelling Bee’s winning words of the 1930s and 40s, you’ll see quite a few you can handle: fracas, knack, torsion, initials, psychiatry. In more recent years, with many more students competing with far more intensity, most of us need a dictionary – not just for the spellings, but for the definitions of the words themselves.

Words like these will be either the stumbling blocks or victory laps for the 278 spellers in this year’s Scripps bee. They’re from all over the map, representing ages from 6 to 15. And while they may not be able to drive, buy lottery tickets, vote, or get a beer after the event, they’re all better spellers than we are.

In fact, most of these students are scholars in other areas. Take 6-year-old Lori Anne Madison. She’s been in spelling bees since age 3, but she’s also won awards in mythology and math events. Arvind Mahankali, who’s 12 and came in third place last year, has received an honors award from Johns Hopkins University’s Center for Talented Youth. And 14-year-old Nabeel Rahman came in first place in the middle school National Geographic Bee.

Of course, spelling on its own is hard enough. Everywhere you look, there are misspellings – even the very word looks like it has too many consonants. Whenever Germanic, Old Norse, Latin, French, and Old English got together, two things were inevitable: confusion and compromise.

And those are evident across our lexicon. Remember the “i before e” rule? It had a plethora of exceptions, so spelling tipsters added “or when sounded like ‘ay’, as in neighbor and weigh.” But that isn’t enough to go on because words like height and efficient pop up and throw us further off the tracks. So a better, overall summary might be “i before e, except after c…or whenever.”

As anyone who’s ever written anything in English can tell you, there are a lot of exceptions to our rules of spelling, not to mention differences in British and American spellings (see colour, humour, etc.). The bad news is that sometimes, you just have to memorize words on a case-by-case basis.
END_OF_DOCUMENT_TOKEN_TO_BE_REPLACED

(CNN) - When Lori Anne Madison, 6, takes the stage Wednesday, she will be stepping into history as the youngest person to compete in the National Spelling Bee.

The second-grader joins 277 other contestants, marking a milestone as the youngest competitor in the Scripps National Spelling Bee, according to the event's record books dating to 1993.

Since 1993, there have been four spellers who were 8 years old, said Mike Hickerson, the bee's communications manager.

Lori Anne beat out 21 kids in the regional bee in Prince William County in Virginia, earning a spot in the national bee.

"States must show they are protecting children in order to get flexibility. These states met that bar," Arne Duncan said.
May 30th, 2012
10:17 AM ET

Obama administration gives 8 states waivers on No Child Left Behind

Washington (CNN) - The U.S. Department of Education granted eight additional states waivers Tuesday from strict requirements of the No Child Left Behind law.

The White House announced a deal last year that allows states relief from provisions of the Elementary and Secondary Education Act, or No Child Left Behind (NCLB), if certain standards are met.

The federal flexibility will be allowed "in exchange for state-developed plans to prepare all students for college and career, focus aid on the neediest students, and support effective teaching and leadership, " according to the U.S. Department of Education.

With the addition of eight news states, the Obama administration has approved 19 states so far, while 17 states and the District of Columbia are under review. 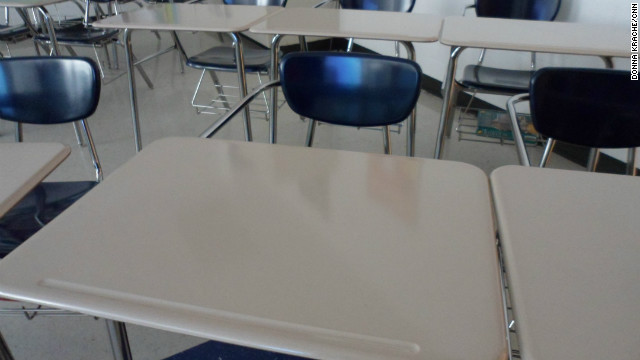 My View: Vouchers will tear down the 'Berlin Wall' of education 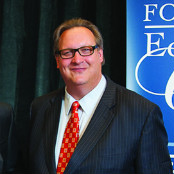 Editor’s note: Robert Enlow is President and CEO of the Friedman Foundation for Educational Choice, the legacy foundation of Nobel laureate economist Milton Friedman and his wife, Rose.

(CNN) Twenty five years ago, President Reagan gave a speech in West Berlin where he exhorted Mr. Gorbachev to "tear down this wall." Two years later, the barbed wire and wall that was a symbol of oppression came crashing down, ending decades of tyranny and leading to one of the greatest expansions of freedom and liberty in the 20th Century.

America has its own Berlin Wall. It is called K-12 education.

As schools let out for summer vacation, far too many parents, particularly low-income parents, are trapped behind the wall of their zip code or family income. They have no real freedom to send their child to a school that works best for them, and far too often they are forced to attend woefully underperforming schools or schools that just don't meet their child's individual learning needs.

This cannot go on.

Instead, we must tear down the Berlin Wall that holds back parents from being able to pick the school that best fits their child's unique learning style.

Thankfully, in the last two years, education reform and school choice have become front and center in America. As Mitt Romney said last week, we must put an end to the millions of children in our nation who receive a "third world education." And President Obama said, "Michelle and I are here only because we were given a chance at an education. I will not settle for an America where some kids don't have that chance."
END_OF_DOCUMENT_TOKEN_TO_BE_REPLACED