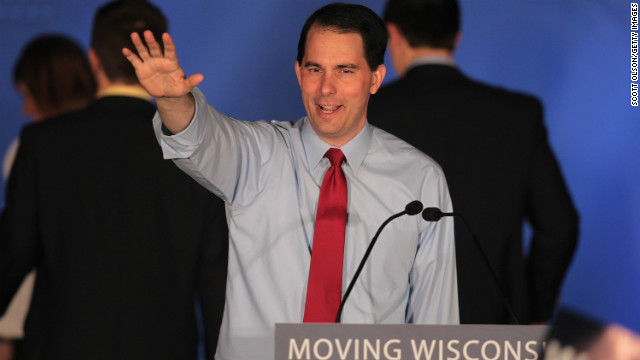 (CNN) - Educators have been front-and-center in the politics of Wisconsin as the battle between state workers unions’ collective bargaining and Gov. Scott Walker’s fiscal measures took shape last year.

The day after the recall election in which both the governor and Lt. Gov. Rebecca Kleefisch retained their seats, education interests are weighing in.  Here’s a sampling of what two education organizations are saying:

“Unfortunately, the biggest winner in tonight’s recall election was the corporate cash that funded the campaign of Governor Scott Walker.”

“The good news is that the barrage of out-of-state corporate money did not keep voters from restoring the balance of power in the state Senate.  The election of John Lehman, a former high school history and economics teacher and a retired National Education Association and Wisconsin Education Association Council member, to the 21st Senate District will restore the balance of power in Madison.”

“Tonight’s outcome takes nothing away from the unprecedented and Herculean effort sparked by tens of thousands of teachers, bus drivers, firefighters, snow plow drivers and other Badger State working families…You slept on the floor of the capitol, and walked the snowy streets of Madison.  You spoke up against Walker’s attack on workers’ rights and unprecedented education budget cuts…”

From the American Federation for Children, an organization advocating school choice:

“In the state’s most high-profile race, Gov. Scott Walker, who was champion of and signed MPCP (the Milwaukee Parental Choice Program) joined Lt. Gov. Rebecca Kleefisch in defeating opponents and ensuring that supporters of educational choice will continue to occupy the governor’s mansion through at least January 2015.”

“The voters of Wisconsin have spoken, and they’ve affirmed their support for leaders who stand in favor of educational options, not special interests,” said Betsy De Vos, chair of the American Federation for Children.