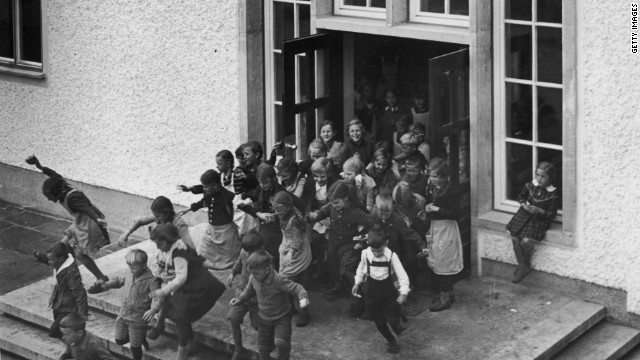 (CNN) – With students around the country anticipating – and then celebrating – that final bell before summer, there is one song that is absolutely inescapable this time of year.

“No more pencils, no more books, no more teacher’s dirty looks.” (All together now) “School’s out for summer!”

So it seems like the perfect opportunity to delve into some music appreciation, specifically songs about schools:

[youtube http://www.youtube.com/watch?v=XbNEOJMGFAo&w=560&h=315]
We might as well start with the inspiration for this list. Alice Cooper’s hard rock ode to the end of the school year helped make the band a mainstay of mainstream culture for 40 years and counting.

“Be True to Your School” – The Beach Boys
It’s hard to argue with loyalty to one’s alma mater, even if the urging is to be true, “just like you would to your girl or guy.” Extra credit for working “braggart” and “letterman sweater” into the lyrics.

[youtube http://www.youtube.com/watch?v=aOZPBUu7Fro&w=420&h=315]
Called out for “wearing [her] dresses way too high” and supposedly being an unfit parent, a widow struts into a P.T.A. meeting and puts the board members on blast for their own hypocrisy.

“Smokin’ in the Boys’ Room” – Motley Crue
The titular act of defiance may seem fairly mild compared to some of the Crue’s other musical topics of excess, but this cover of a Brownsville Station song is really just about the teenage desire to rebel against authority.

“To Sir, With Love” – Lulu
It doesn’t carry quite the same impact unless you’ve seen the movie of the same title, but this theme song giving thanks to those teachers who help shape us still packs an emotional punch.

“Hot for Teacher” – Van Halen
[youtube http://www.youtube.com/watch?v=FyMQLrnbBgE&w=420&h=315]
“I don’t feel tardy.” A perfect elevation of the clichéd schoolboy crush to ‘80s lecherous indulgence. It may sound odd to say this song is from a more innocent time (it’s certainly not an innocent subject matter), but this was years before scandalous teacher-student relationships made headlines.

“Flowers Are Red” – Harry Chapin
A not-so-thinly veiled indictment of a school system that squashes out creativity and mandates conformity. Forcing children to color inside the lines isn’t fascism… but apparently it’s close.

“Another Brick in the Wall, Part 2” – Pink Floyd
As a stand-alone, this song doesn’t really impart much of a message, other than that the teacher should really leave them kids alone. But be honest, could you imagine leaving this off the list?

“Graduation (Friends Forever)” – Vitamin C
[youtube http://www.youtube.com/watch?v=foyAOoVagWw&w=560&h=315]
Give a big assist to Pachelbel’s Canon in D, which this song samples heavily, and another to the brilliant title, which guaranteed heavy play at graduation ceremonies for years.

What school-themed songs would you nominate for inclusion on the list? Share your favorites in the Comments section below.