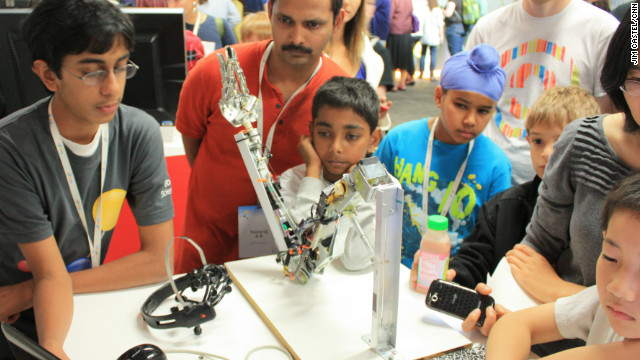 Washington (CNN)  - American students can successfully conduct simple science experiments at school, but aren't able to explain the results, a new report from the National Assessment of Educational Progress shows.

Results released today reveal that America's fourth-, eighth-, and 12th-graders struggled when investigations had more variables to manipulate or required strategic decision-making while collecting data. Many weren't able to explain why certain results were correct.

It's the first time the National Assessment of Educational Progress, known as the Nation's Report Card, measured how students performed on hands-on and interactive computer tasks like a professional scientist might. While traditional standardized tests grade students on what they know, people in the workforce are measured on how they apply what they've learned in school. This analysis moves away from "paper and pencil" tests and should allow for a different type of analysis by education experts.

The testing involved more than 2,000 students from public and private schools in fourth, eighth and 12th grades during the 2009 school year. In one task, 12th grade students were asked to determine the best location to build a town based on the quality of the water supply.  The results show 75% of students could perform tests on water samples and tabulate data, but only 11% could "provide a valid final recommendation by supporting their conclusions with details from the data," according to the report.

"It’s tragic that our students are only grasping the basics and not doing the higher-level analysis and providing written explanations needed to succeed in higher education and compete in a global economy," NAEP chairman David Driscoll said in a statement.

The Nation's Report Card results reflect the experiences of K-12 teachers, said Patricia Marstellar, director of Emory University’s Center for Science Education, but she sees reason to be optimistic. Problem-based learning requires the support and education of teachers, school boards, administrators, education professors and others; measuring how students succeed and struggle at it might help solidify hands-on learning in the curriculum, despite the obstacles.

"It’s moving away from, 'Which of the following are mammals?' the little memorization questions, to something that really does address how science is done," said Marstellar, an Emory biology faculty member. "This is a way, way better way to investigate whether students are learning what we think they need to learn to be active citizens and scientifically literate.