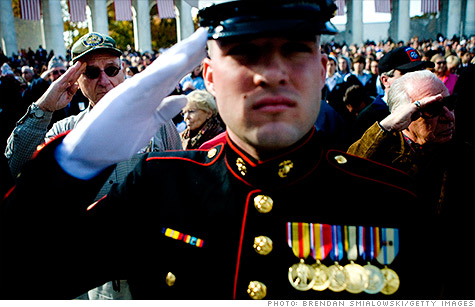 Veterans are the intended beneficiaries of the post-9/11 GI Bill, but for-profit private schools are raking in hundreds of millions of dollars from the government.
June 26th, 2012
02:08 PM ET

For-profit schools cash in on the GI Bill

NEW YORK (CNNMoney) - The GI Bill was designed to help veterans, but the biggest beneficiaries seem to be the for-profit private schools that are raking in taxpayer dollars.

The Department of Veterans Affairs bankrolls four years of higher education for veterans who have served since September 11, 2001. The VA paid out $4.4 billion for tuition and fees in the two academic years spanning 2009 to 2011. For-profit private schools raked in 37% of those funds, but educated just 25% of veterans, according to the U.S. Senate's Health, Education, Labor and Pensions (HELP) committee.

So what are taxpayers getting in return? According to the VA, the graduation rate is just 28% at for-profit schools like University of Phoenix and DeVry University (for all students, not just veterans). That compares with a graduation rate of 67% at non-profit private schools and 57% at public schools.