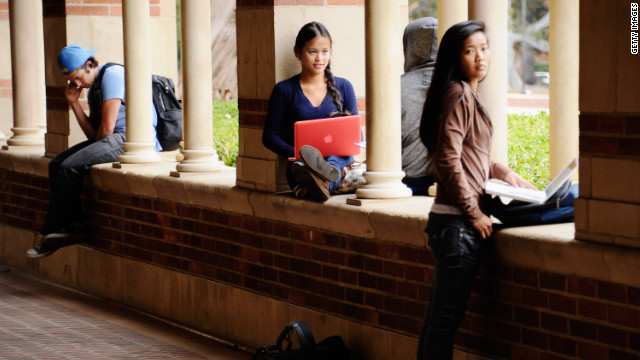 Where's the cash for college?

(CNN) – The U.S. economy is tightening its grip on Americans’ options when it comes to paying for college.

And while parents proportionally contribute the most money toward an undergraduate’s degree, the amount they’re contributing has dropped dramatically in recent years.

The information was revealed in Sallie Mae’s National Study of College Students and Parents, which was conducted by Ipsos and found that Americans are relying on a variety of sources for college funding.

For the 2011 – 2012 academic year, the study found that parent and student income and savings combined to make up 40 percent of the total cost of college.

Borrowing by students and parents made up 27 percent. Contributions from relatives and friends added up to 4 percent.

But grants and scholarships made up the single biggest piece of the pie at 29 percent. And what may raise some concern among the nation’s college hopeful is a recent drop in the proportion of families that got scholarship money.

In 2011, 45 percent of American families received some form of scholarship to help with college costs. A year later, that number dropped to 35 percent.

The study cited shrinking endowments and smaller budgets as possible reasons why colleges are able to provide less assistance in the form of scholarships.

But Americans have become increasingly dependent on assistance to foot the bill. From their income and savings, American parents reduced their spending by 11 percent from last year – and by 32 percent from two years ago.

Families’ need to save money has extended to school and living choices as well. Enrollment at community colleges, which typically cost less than state universities, increased by 6 percent over the previous year.

More than half of America’s students are living at home rather than staying on or near campus, and 50 percent of those students who work are spending more hours doing it.

Despite the challenges, there's still a strong desire for higher education. When asked whether a college degree is an investment in their future, a vast majority (83 percent) of college students and parents strongly agreed.

Majorities also felt that a college education is needed now more than ever and that it’s a clear step toward earning more money.