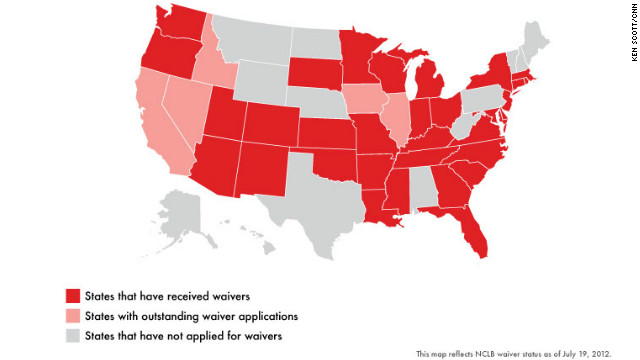 (CNN) - The White House announced on Thursday that it would grant seven additional waivers from restrictive provisions of the No Child Left Behind (NCLB) law. Arizona, Kansas, Michigan, Mississippi, Oregon, South Carolina, and Washington, D.C. will receive the newest flexibility waivers, according to a U.S. Department of Education press release. To date, 32 states and D.C. have received waivers.

The NCLB law, also known as the Elementary and Secondary School Act (ESEA), has many sections, and through these waivers, federal officials are allowing states to set their own standards for parts of the law. The waivers aren’t an automatic reprieve from all aspects of NCLB.

In order to receive these ESEA flexibility waivers, states provided evidence that they would initiate education reform efforts approved by the Obama administration, including linking student test scores to teacher evaluations.

Many supporters of the 2002 law say that the intent of NCLB is to improve education for all students, including poor and minority students, but critics contend that the law has created a “teach to the test” culture in too many classrooms.

States are asking for waivers because they consider NCLB’s goals unattainable or even unrealistic. The law mandates that all students be proficient in reading by the end of third grade by 2014, and that all students will graduate from high school. States are far from accomplishing these goals; almost half of America’s schools are failing to meet these NCLB mandates.

Gridlock in Congress has delayed changes that could come with NCLB’s reauthorization. President Obama says that’s why he’s allowing states to develop their own standards of accountability and apply for waivers.

Michigan’s waiver, for example, means that schools will not have to have every student pass state standardized tests by 2014, as required under NCLB. Instead, Michigan’s Department of Education can set its own timeline for full proficiency.

While most states have opted to unshackle themselves from NCLB’s rigid mandates, a few states aren’t convinced that waivers will leave them better off.

Vermont had initially applied for a waiver, but withdrew its application in May. The state’s teacher’s union president, who worked on the waiver application, said that the state and federal governments couldn’t come to an agreement on the terms of the waiver. The Vermont Department of Education says on its website, “Vermont would need to do significant more work on the ESEA waiver in order to have an approvable application. Vermont’s waiver would no longer be the one that was agreed upon by stakeholders months ago when first submitted.”

Alabama State Superintendent of Education Tommy Bice said in a statement to CNN, “The Alabama State Board of Education…has already created a plan for education reform in our state and feel strongly that if our plans and the requirements for the waiver are aligned we will move forward, but not if it requires us to change what our leadership has already determined is appropriate for our state.” The federal government did grant Alabama its request to freeze the percentage of students who must be proficient by 2014. Each year, that target increases until 100% percent of students meet proficiency standards.

Nebraska doesn't want a waiver, either. In a statement to CNN, Nebraska Department of Education spokeswoman Betty VanDeventer said, “Nebraska has not applied for a waiver because the state would not qualify....Nebraska also is in the process of developing its own teacher evaluation system that also would not meet waiver requirements.”

The deadline for the third round of waivers is September 6, and several states are submitting applications. West Virginia waited for feedback from other states before proceeding with its waiver application.

“It’s our best move,” said Liza Cordeiro, spokeswoman for West Virginia’s education department. “We are focused on the Next Generation Content Standards, which will include project-based and personalized learning…and focuses on fewer concepts while stressing deeper learning and understanding,” Cordeiro told CNN.

Do you think that waivers will have an impact on classrooms? Tell us in the comments section below.