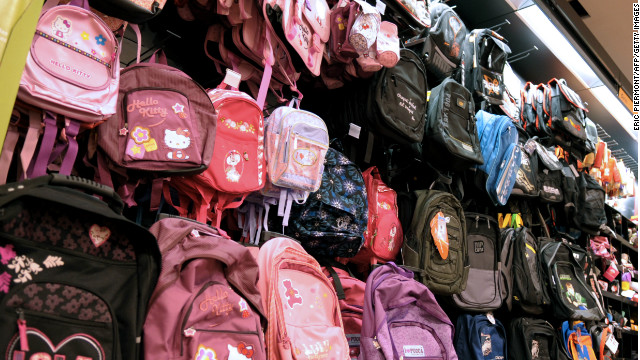 Back to school: How soon is too soon?

(CNN) – When do your kids go back to school?  School start dates are about as varied as the styles and colors of backpacks you find at local retailers.

The federal government doesn’t mandate the number of days in a school year, but most states require about 180.  How those days work into the calendar is usually set by local school boards.

For example, in Cherokee County, Georgia, students went back to school on August 1 this year.  Yes, you read that right, the first day of August.

And while students in other districts around the U.S. return on various dates this month – August 13 and 27 seem to be popular – many, like Virginia Beach, Virginia students, return on September 4, the day after Labor Day.

New York City schools will be back in session on September 6.

Still others wait until the following Monday, September 10 to start the new school year.

Then there are the year-round schools like those in Durham, North Carolina that take long breaks throughout the year but no real “summer” as most kids know it.  Durham started the school year on July 16 and will end it on June 7, 2013.

Oklahoma City piloted a year-round program in seven schools and will shift to year round for all its city’s schools this year.

The debate rages on among supporters of three types of school calendars: the year-round calendar, the “balanced calendar” – a school year with an earlier start date and longer breaks – and the “traditional calendar” with a start date after Labor Day.
END_OF_DOCUMENT_TOKEN_TO_BE_REPLACED