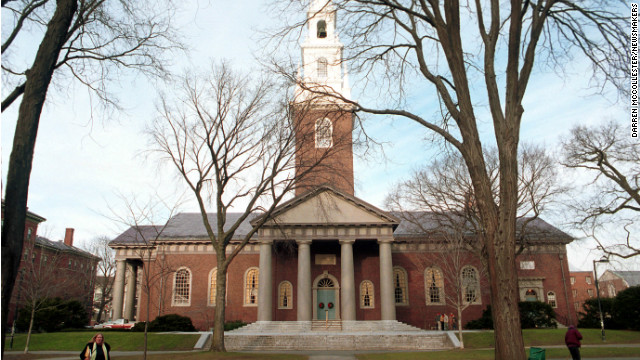 Harvard University, the oldest institution of higher learning in the U.S., is investigating allegations of cheating on a take-home final exam in May.
August 30th, 2012
07:24 PM ET

Allegations of widespread cheating in government class probed at Harvard

(CNN) - Harvard University is investigating allegations that almost half the students in an undergraduate class last spring may have plagiarized or "inappropriately collaborated" on their final exams, the school announced Thursday.

Following an initial investigation, Harvard's administrative board, which enforces academic regulations, undertook "a comprehensive review of the more than 250 take-home final exams" submitted at the end of a course, the school said in a statement.

The Harvard Crimson, the school's flagship student-run newspaper, identified the class in which the cheating allegedly occurred as Government 1310: Introduction to Congress.

A document on the website of Harvard's registrar's office says the class had 279 students.

"We take academic integrity very seriously because it goes to the heart of our educational mission," said Michael D. Smith, dean of the faculty of arts and sciences, in a written statement.

Last semester during grading, "the faculty member teaching the course questioned the similarities between a number of exams," according to the statement.

The board then reviewed the questionable exams and interviewed the students who submitted them, eventually launching a wider review along with the class's professor, the statement said.

That review is still underway.

A copy of the take-home exam found on Harvard's website shows that it laid out a series rules for students to follow.

"The exam is completely open book, open note, open internet, etc.," the instructions begin. "However, in all other regards, this should fall under similar guidelines that apply to in-class exams. More specifically, students may not discuss the exam with others ... this includes resident tutors, writing centers, Etc."

Among the exam's questions was an essay requiring students to address the question: "Do interest groups make Congress more or less representative as an institution?"

Students had one week to complete the exam.

Matthew B. Platt, the assistant professor in the school's department of government who taught the class, did not immediately respond to a voice mail and an e-mail from CNN.

The initial reaction on campus is one of shock, according to Ben Samuels, a senior and the editor of the Harvard Crimson.

"I think we're pretty surprised by it," he said. "This appears to be on a scale that's fairly unprecedented at least from we've seen in the past."

Samuels said there had been chatter about a major cheating incident for several days prior to Thursday's announcement.

"There had been some talk that there was some sort of cheating scandal that was beyond the scope of what you would normally see," he said.

The school said those found guilty of "academic dishonesty" could be forced to withdraw from the college for a year, in addition to facing other, unspecified disciplinary actions.

"These allegations, if proven, represent totally unacceptable behavior that betrays the trust upon which intellectual inquiry at Harvard depends," Harvard University President Drew Faust said in a statement.