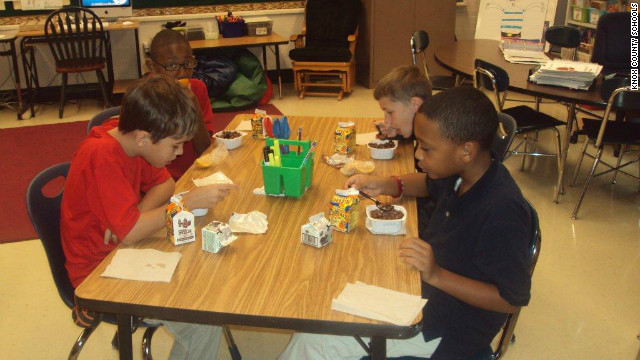 Breakfast comes to the classroom

(CNN) - Less than half of the children in America who are eligible for a free or reduced breakfast take advantage of the USDA-provided meal. A program called "Breakfast in the Classroom" is trying to get more lower-income students to eat breakfast. The program, managed by a group of organizations known collectively as the Partners for Breakfast in the Classroom, brings food to the students in class after the morning bell. That way, students don't come to school early just to eat, and they aren't rushing to get to class, skipping breakfast on the way. The program was launched in five school districts around the country and expanding to include ten more this school year.

Research suggests that there are educational benefits to eating breakfast at school, even over students who eat the meal at home. These include better attendance, behavior and higher standardized test scores.

Knox County Schools in Tennessee, which opened its doors to students on August 14, is a newcomer to the in-classroom meal program .

Jon Dickl, the director of school nutrition for Knox County, told CNN that there are several advantages to eating breakfast in class. "The students are in their seats ready to learn as soon as the bell rings," Dickl said. "It reduces tardiness and discipline issues and provides an opportunity for teachers to develop relationships," he continued.

In Knox County, as in many other districts using the pilot program, all the students are served breakfast at no cost to the student, regardless of their family's income. Dickl said doing that increases the percentage of students who eat breakfast overall, and leads to social benefits. "Relationships are developed when people have food together," Dickl said.

High school students tell Dickl that instead of gravitating toward their friends as they would do in a cafeteria setting, the students are having conversations with students from their classes who they wouldn't talk to otherwise. "It's expanded their social network," Dickl said.

The district's teachers say they also benefit from eating with their students, by building relationships and incorporating lessons into the morning meal, according to Dickl. One Knox County high school practices ACT vocabulary words.

Dickl says Knox County is phasing in the program and expects to reach 11,000 students in 22 of its schools by mid-October. The district is serving breakfast at all grade levels, from elementary through high school.

A hot breakfast is always an option in Knox County. On the day CNN interviewed Dickl, whole grain sausage biscuit with a fruit cup was being served. On another day that week, Knox County offered students hot blueberry waffles with reduced-sugar syrup. Bagged cereals, apples, bananas, fruit juices and fat-free flavored milk or 1% milk are also delivered to classrooms daily.

Dickl says that most parents are in favor of the program, too. The only negative comments he's heard are from parents who are concerned that providing free breakfasts uses local tax money allocated for education. Dickl says that these parents are mistaken. Most school nutritional services departments in U.S., he says, are self sufficient. They rely on federal USDA money, state funds, and money that students spend on lunch. "We take no money locally and have to be financially sustainable," Dickl says.

Breakfast in the Classroom is run by Partners for Breakfast in the Classroom, which is funded by grants from the Walmart Foundation. The members of the partnership include the Food Research and Action Center, the National Association of Elementary School Principals Foundation, the National Education Association Health Information Network (NEA HIN), and the School Nutrition Foundation. NEA HIN provides training workshops for teachers who are incorporating the program into their classrooms.