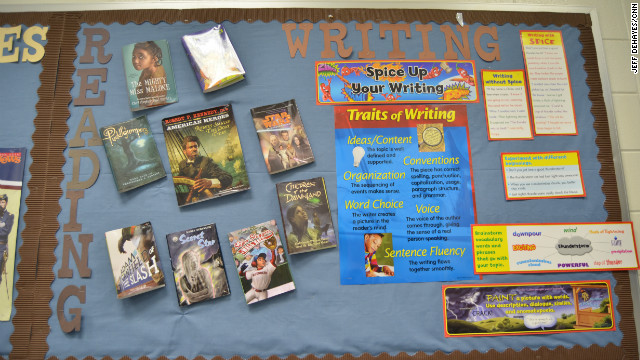 (CNN) When it comes to writing, girls are better than boys.

That’s a generalization, but it’s one that is supported by the latest writing test from the National Assessment of Educational Progress (NAEP), better known as the Nation’s Report Card.

The test, taken by 24,100 eighth-graders and 28,100 students in the 12th grade, was administered in early 2011. NAEP tests in different subjects have been given to students in the U.S. since 1969.  This year, however, marked the first time that the writing test was computer-based.  Students were able to take advantage of editing software and other writing tools, such as spell check and a thesaurus, as they crafted their writing samples.

Since this was the first large-scale writing assessment designed to be taken on a computer, the National Assessment Governing Board, which administers the NAEP, said that it could not make comparisons to previous “paper and pencil” writing tests.

Students were asked to perform writing tasks in three areas:  To persuade, trying to change the reader’s point of view; to explain, trying to broaden a reader’s understanding of a topic; and to convey experience, trying to provide an account of a real or imaginary experience to a reader.

The NAEP writing test is a scaled test with a range of 0-300, and a mean score of 150.  “Achievement levels” were set along that scale for the categories Below Basic, Basic, Proficient and Advanced.

According to the board, performances varied by race, ethnicity, gender, school location and other factors, such as parents’ educational attainment.  But the most notable achievement gap was between males and females in both eighth and 12th grades.

On average, female students in the eighth grade scored 160; their male counterparts scored 140.

Education analyst Susan Pimentel, one of the team presenting the test scores on Friday’s NAEP conference call, said that while this test cannot determine cause and effect, there are some clues as to why the gap exists.  Students were surveyed to find out some additional information about them as they took the test. Among those surveyed, said Pimentel, 53% of girls agreed or strongly agreed that “Writing is one of my favorite activities”, but only 35% of the boys felt that way.  Since writing improves with practice, she said this is “an important variable to observe.”

According to the survey, 39% of 12th-graders said they write only one page of homework or less per week in English, which is also of concern as high school teachers focus on college readiness as one of the goals of the Common Core State Standards, said Pimentel.

The NAEP test also revealed that regardless of income, students who frequently use computers to draft and revise their writing performed better than those who regularly do not.

To improve on writing scores, the board encourages engaging boys in “meaningful” writing as part of the curriculum and providing all students with opportunities to use computers to write and edit whenever possible.

You can read the 2011 Nation’s Report Card in writing here.