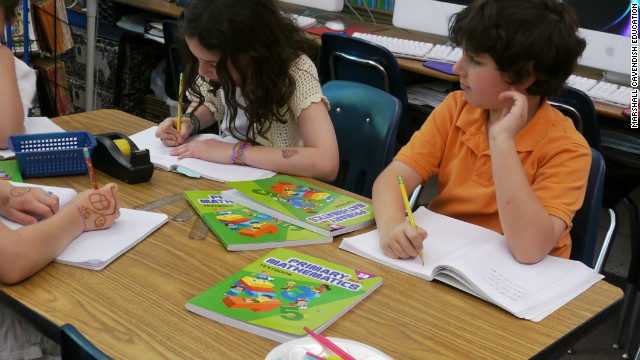 My view: America's students can benefit from Singapore math 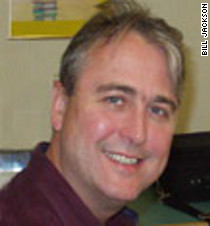 By Bill Jackson, Special to CNN

Singapore math is getting a lot of attention as more and more schools in the United States are using Singapore-based methods and materials to improve the teaching and learning of mathematics. Many parents and teachers are wondering if a change is really necessary. The answer is yes.

I’ve seen firsthand the difference the Singapore math approach can make. I began using Primary Mathematics textbooks from Singapore’s Marshall Cavendish Education in 2000 when I was a classroom teacher. I have used Singapore math with both low-income inner-city students and affluent suburban students, and found that, when taught in the right way, it makes learning mathematics fun and engaging, allows students to understand mathematics deeply, and helps them become proficient at solving very complex math problems.

So what exactly is different about Singapore math? Singapore mathematics lessons begin by engaging students in hands-on learning experiences followed by pictorial representations, which help them form a mental image of mathematical concepts. This is followed by an abstract stage, where they solve problems using numbers and symbols. This approach makes the learning of mathematics fun and meaningful, and helps students develop positive attitudes about math.

Typical U.S. math textbooks are thick and heavy and they cover many topics superficially and usually in an incoherent way. In contrast, Singapore textbooks focus on fewer topics, taught in-depth for mastery, carefully building mathematical understanding in a systematic way.

In addition to these resources, there is also an interactive online program, Math Buddies, which is enhanced with animated lessons and practice questions for the digital learners.

Singapore math emphasizes conceptual understanding: the “why” not just the “how.” As it is not enough for students to just get a correct answer, multiple solution methods are encouraged and evaluated as to their advantages and disadvantages. Students need to be able to explain their thinking and understand and explain the thinking of their peers.

Singapore first drew national attention back in 1995 with the release of the results from the Trends in International Math and Science Study, where Singapore and a handful of other developed East Asian nations scored at the top of the world in mathematics. Meanwhile, scores in the United States that year and in subsequent years were less than stellar. Looking for improvement, educators in the United States decided the Singapore approach was worth exploration. Ironically, it was an American, psychologist Jerome Bruner, who developed the methodology that led to Singapore’s math curriculum.

Recently, in the process of creating the Common Core State Standards for mathematics (to develop similar goals and criteria for math instruction across America), educators took an even closer look at the Singapore math program and realized that it had a lot of what they were seeking.

The main goal of Singapore math is to foster problem-solving abilities in students, which helps in all subject areas.

One important aspect of this is the model drawing method in which students solve complex word problems by drawing pictorial “bar models” to illustrate problem situations.

Take the following problem from the fifth grade Singapore math textbook as an example:

“Ryan and Juan shared $410 between them. Ryan received $100 more than Juan. How much money did Juan receive?” We can represent the problem situation by drawing the bar model seen in the figure. 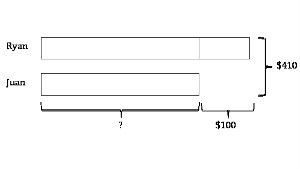 Figure: Ryan and Juan shared $410 between them. Ryan received $100 more than Juan. How much money did Juan receive?

Ryan’s and Juan’s amounts are represented by the rectangular bars. The known information is indicated with brackets. The unknown quantity, which is what we are trying to find out, is indicated by a question mark. From the diagram, it is easy to see that we first need to subtract the extra $100 that Ryan has and then divide the remaining amount by 2 to find the answer.

The bar model is really a form of pictorial algebra. (If you think of Juan’s bar as x then Ryan’s bar becomes x + 100 and you get the equation x + x + 100 = 410.) The bar model converts the abstract words of the problem into an easy to understand pictorial diagram that helps students solve algebraic problems without using formal algebra. In later grades the question mark in the model above can be replaced by a variable, making the transition to formal algebra easy.

Although Singapore math may be different from the way previous generations learned math, today’s children are using it to gain number sense and to learn to solve problems mentally, and to internalize important mathematical properties and the rules of algebra informally. Many more American students could benefit from this novel approach, as Singapore's students have already.

The opinions expressed in this commentary are solely those of Bill Jackson.