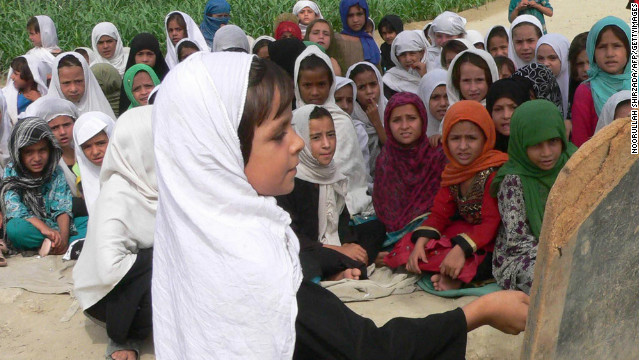 Afghan schoolgirls study in an open air school in the outskirts of Jalalabad on September 11, 2012. Violence and abuse against women continues to be a major problem in Afghanistan a decade after US-led troops brought down the notorious Taliban regime.
October 11th, 2012
04:12 AM ET

Education a focus on International Day of the Girl Child

(CNN) - The United Nations has designated October 11 as the International Day of the Girl Child.

The mission of the day is “to help galvanize worldwide enthusiasm for goals to better girls’ lives, providing an opportunity for them to show leadership and reach their full potential.”

One ingredient crucial to affording girls the opportunity to reach their full potential is education.

International Day of the Girl Child comes as the world reacts to the shooting of a 14-year-old Pakistani girl, Malala Yousufzai, who attends school and wrote online about the value of educating girls. The Taliban took responsibility for the attack, which also injured two other classmates. The shooting has been called despicable and cowardly, and has drawn tremendous international interest.

"And why are they so afraid of Malala?" columnist Frida Ghitis wrote on CNN.com. "Mostly, because she is not afraid of them."

But many girls don't have the support Malala does.

In more than 100 countries, school is not free, and parents of limited resources choose to invest in their sons’ education, not their daughters’.  The high rate of child marriage in some cultures means that many girls in developing countries never even have the opportunity to go to school. Worldwide, only 30% of girls are enrolled in secondary school.

According to UNESCO, “Despite progress, girls and women continue to be disproportionately excluded from education, especially at secondary education level and in the area of adult literacy.”

Educating girls has far-reaching positive effects for the individual, her community and her world. According to DayoftheGirl.org, educating girls...

Reduces the rate of child marriage: A girl who has 7 years of education will typically marry four years later and have fewer children.

Reduces disease: A girl who has basic education is three times less likely to contract HIV.

Strengthens the economy: Only a year of extra school can increase a girl’s future earnings by 10% to 20%.

Promotes health: Children born to educated moms are twice as likely to survive beyond the age of 5.

Solves problems: Because education promotes critical thinking skills, girls learn to solve problems, a vital skill for the next generation of world leaders.

What you can do, today and beyond

CNN is partnering with 10×10, a global action campaign to promote girls’ education, to spread the message that educating girls in developing nations can change the world. A film, "Girl Rising," will air in spring 2013 that tells 10 girls' stories from around the globe. The organization has kicked off a photo campaign to invite people to raise awareness on why educating girls is #basicmath, and we hope you’ll take part. You can help. This CNN iReport assignment can show you how!