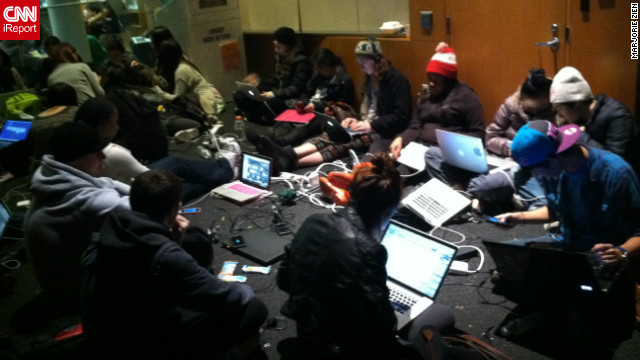 Students gather in the only building at the New School that has electricity after Superstorm Sandy struck New York City.
October 31st, 2012
12:01 PM ET

(CNN) – Even in its aftermath, Superstorm Sandy is having a major impact on education. Schools in New York City and much of the state of New Jersey, among other areas, were closed for the third straight day on Wednesday. NYC Schools is the nation’s largest school system, with more than one million students attending about 1,700 schools in the city.

CNN scanned a variety of local news sites and found weather-related school closings from as far south as South Carolina to as far north as Maine on Tuesday. By Wednesday, there were fewer closings along the coastal states, but significant closings in inland states like Ohio and West Virginia. Some schools, both public and private, still had no power Wednesday morning.

Colleges and universities have also shut down due to this disaster.

New Jersey’s Rutgers University closed at noon on Monday. The university canceled classes on two of its largest campuses for the rest of the week, affecting more than 50,000 students.

Both Yale and Harvard Universities canceled classes according to their websites. Harvard Crimson, the school newspaper, said that Harvard rarely cancels classes, but Monday's closing was in part a response to Massachusetts Governor Deval Patrick’s request that all schools and colleges close statewide. Yale closed both Monday and Tuesday and resumed classes on Wednesday.

In response to the storm, some of the nation’s top universities have extended an important deadline for prospective freshman, the November 1 deadline for early admission applications. Students applying to Columbia University, Duke University and the College of William and Mary and several others have a few extra days to turn in their paperwork.

The U.S. Department of Education has also extended an important deadline. The agency extended its October 30 deadline for new Race to the Top district applications. The new deadline for the $400 million award hadn’t been announced as of Wednesday, but the USDOE web site says the new deadline will be posted soon.

Did the storm affect your school? Tell us in comments below.