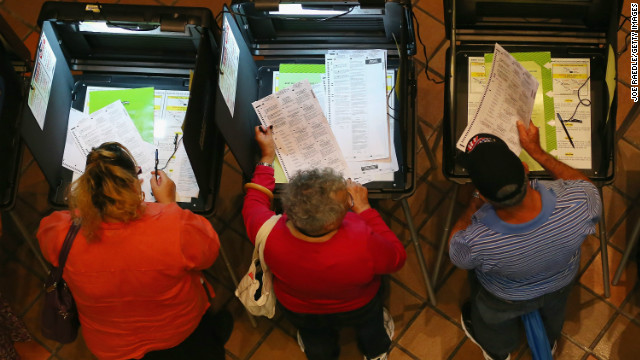 (CNN) On Tuesday, voters in two states – Washington and Georgia – will be weighing in on charter schools.

Charter schools are independent public schools that have flexibility in certain aspects of education like curriculum and length of the school day. In return for this flexibility, they are held accountable for student performance.

The research is mixed on whether students in charters perform better than their traditional public school counterparts. Some cite the CREDO study from Stanford University, which found that “17% of charter schools provide superior education opportunities for their students.” According to this study, about half the charters did not fare any better or worse than their traditional school counterparts, and about 37% of the charters fared worse.

Others cite research like that found in the “Informing the Debate” study from the Boston Foundation,  which “found large positive effects for Charter Schools at both the middle and high school levels.”

Currently, 41 states and the District of Columbia have charter schools.

The topic of charter schools, including how they are established and who gets to attend them, stirs up a lot of emotion among parents, educators and policymakers.  Because it’s relatively new territory, shaping legislation on charters has become a public tug-of-war. The states of Washington and Georgia have charter school initiatives on their ballots.

Washington has put ballot measures on charters in front of voters three times before, each one rejected – most recently in 2004, when the measure failed by 16 percentage points.  There are no charter schools in Washington.

The latest attempt is Initiative 1240, which would allow for the establishment of eight charter schools in the state per year – 40 over five years. At the end of that period, the charter system would be up for review. The state-approved charter schools would be free and open to all students and be independently operated.

Washington is bound by its state constitution to fully fund education. In the tough economic times of the last three years, the state cut $2.5 billion from its education budget.  Earlier this year, the Washington Supreme Court ruled that the state was underfunding its public schools so much that it was not meeting its constitutional obligation to educate each child. The state was ordered to comply with its constitutional mandate and not to make further cuts for fiscal reasons.

Critics of charters say this is a bad time for I-1240, that it is the wrong time for the state to embark on a new system of schools that they say will cost more money.

“Why would you add charters at a cost of millions of dollars at a time when we haven’t fully funded what we have now?” asks Marianne Bichsel, communications director for People for Our Public Schools.

Bichsel said the organization’s opposition to I-1240 is not about opposition to charter schools, it’s about a “poorly written” measure that she said will at best serve less than 1% of Washington’s students and families. She points out that the eight schools established each year will choose their students by lottery.

“This is the wrong approach at the wrong time,” Bichsel said. “We need solutions to serve all students.”

Supporters of I-1240 say that charter schools would offer parents choices and insert true competition into the educational space.  The charter schools they envision would not be bound by district curriculum mandates and policies and not be subject to teachers unions’ wishes.

Liv Finne, director for education at the Washington Policy Center, calls 1240 “a modest proposal” in that it would allow for only eight charter schools per year in a state that currently has more than 2,300 schools.

She and other charter advocates want a decentralized, accountable system of schools.  Finne believes that I-1240 is one way to create that kind of system and bring parents alternatives to failing schools.

“For too long, Washington state has clung to an outmoded highly centralized system of delivering education, which the evidence shows fails to adequately educate far too many children,” said Finne.

She points out that in the 41 states that have charters, they are popular with parents, the public and policymakers.

Bichsel said that  I-1240  mandates that the charter schools would be run by independent charter operators and interests outside Washington. The initiative, she said, is being funded by wealthy individuals both inside and outside the state.

As of October 18, Bill Gates has donated more than $3 million to support I-1240, according to the Washington Post.

Microsoft billionaire Paul Allen of Seattle and Alice Walton of Wal-Mart founding family have also contributed, among others, according to state public disclosure records.

Supporters of the initiative, including Finne, point to the financial muscle of Washington state’s teachers unions and approximately $33 million per year that is collected in union dues as the other side of the money trail. The unions are against the charter initiative.

In Georgia, 2,700 miles away, voters also have charters on their minds.

Charter schools have existed in Georgia for 17 years. If a group wants to start a charter school, it brings its petition before a local school board, which will approve or deny the request. If rejected, the group can go to the State Board of Education, but if the charter is granted, the school cannot receive local tax funding, only state and federal funds.

There was a third route: The Georgia Charter Schools Commission.  But in 2011, the Georgia Supreme Court ruled this commission unconstitutional.  The result was the drafting of Amendment 1 to the Georgia State Constitution.

Amendment 1 would give a  state commission the authority to approve charters.  A commission of individuals appointed by the governor, lieutenant governor and state House speaker could approve a charter school petition that had been denied by a local school board and the state board.

Rich Thompson is a parent of two daughters.  He and his family live in Southwest Atlanta. Every school day, he drives past the neighborhood school located half a mile from his home to transport his daughters to two charter schools more than 10 miles away. He supports Amendment 1.

Thompson said he tells other parents that his daughters, like their kids, are unique and that they need a school system tailored “to their needs, and not the needs of a system.”

He said his daughters are thriving in the charter school environment, which he believes is because it is a “culture of higher achievement,” versus that of his neighborhood school.

Thompson said that he tried to help change his neighborhood school, asking questions about spending priorities and advocating for academic rigor. But even while serving on the local school council, he kept hitting roadblocks. “I saw how gridlocked the system was when I saw parents who just wanted to make the system better just turned away at every turn,” he said.  “It only seemed to matter when I pulled my child out of that system and put her in a public charter school.”

In his daughters’ charter schools, Thompson said, “the principal is very attuned to the needs of students and parents, and he listens to what we have to say. … That is the difference that I see in a public charter school that I’d really like to see more parents get.”

Opponents of Amendment 1 say charter interests will be able to do an “end-around” to the established school boards.  If a local school board denies the charter petition, the petitioner would simply go to the state commission and ask, they say.

They also agree with their counterparts in Washington who say charters siphon money away from traditional public schools, especially at a time when funding is tight.

But even among those who support charters, there are those who oppose this amendment, because they say it will take authority from elected officials and put it in the hands of commission appointees.

The Georgia PTA, which supports charter schools, is opposed to Amendment 1.

Karen Hallacy is the legislative chair for the Georgia PTA.  She said the PTA supports school choice, but that “Amendment 1 is not about school choice.”

“This is about creating a bureaucracy at the state level that is not accountable to any taxpayer, that they can authorize schools where there hasn’t been a demand for them, and siphon funds away from schools,” said Hallacy.

She also pointed out that parental involvement, one of the foundations of charter schools, is not part of the proposed amendment. Nor is there a requirement for certified teachers in the state-sanctioned charter schools in Amendment 1, she said.

The amendment has become a lightning rod in the state.  Georgia Gov. Nathan Deal supports it.  Georgia’s state school superintendent, John Barge, does not.

To complicate matters further, a Dalton teacher and an Atlanta minister have filed a lawsuit claiming the wording of the ballot question is “purposely misleading.”

Thompson said there is “nothing misleading whatsoever” in the amendment, and that he wants other parents to have the “marvelous experience” his family has in their charter schools.

Hallacy agrees that there are ways to improve public education, but she said this amendment is not one of them.

“This is not about education,” said Hallacy. “This is about money and power, and people should vote against this.”