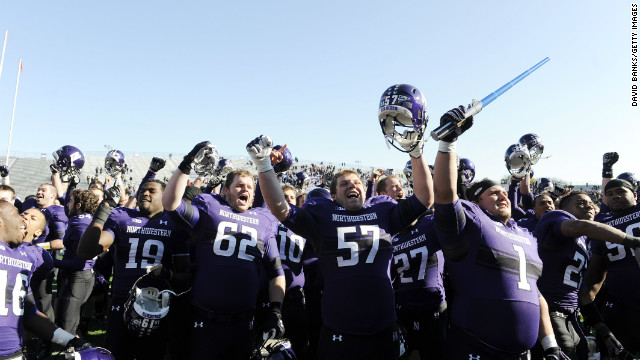 The Northwestern Wildcats earned the #1 ranking in the New America Foundation's 'Academic BCS,' based on the school's player graduation rates and other academic factors.
December 13th, 2012
05:02 AM ET

(CNN) - Imagine a college championship bowl game where the teams are Northwestern and Northern Illinois.

The Wildcats and Huskies are not exactly the first teams that come to mind when you think of football powerhouses, but according to the New America Foundation, they are academic giants among the teams in this year’s Bowl Championship Series.

In its sixth annual Academic BCS, the foundation rated Northwestern No. 1 and Northern Illinois No. 2 among the 25 college teams in this season's final BCS standings.

How did they determine the rankings?  The Education Policy team at the New America Foundation considers several factors. It calculates the difference between an entire football team’s graduation rate versus that of the other male students at the school; the graduation gap between black and white players on the team versus the same gap among the total male enrollment at the school; and the gap between the graduation rate of black football players versus all black males at the college.

The Education Policy team also factors in the NCAA’s Academic Progress Rate, which according to the NCAA’s website is “a term-by-term measure of eligibility and retention for Division I student-athletes that was developed as an early indicator of eventual graduation rates.”

According to the Education Policy team’s formula, Northwestern was ranked No. 1 because it has a 90% graduation rate among its football players, with no graduation gap between its white and black players.

As for Northern Illinois, the study points out that the school only graduates 51% of its total student body, yet 66% of its football players graduate, putting it in the number 2 spot for the Academic BCS rankings.

Rounding out the top 5: Boise State, followed by Stanford and then Notre Dame.

Some question the methodology of an academic ranking system that puts Northern Illinois and Boise State ahead of Stanford and Notre Dame, but the inclusion of the graduation gap comparisons makes the final rankings about more than graduation rates. Alex Holt, an education researcher at the New America Foundation, told CNN that, "Our study is the only one out there that can contextualize these numbers.

“We’re not trying to say which schools graduate players at the highest rate,” Holt said. “We’re asking ‘Are you graduating players at at least as high a rate as other students?’”

Holt says that the study was initiated by the foundation because many interests benefit from the big money generated by college football. The question is, do students benefit from it?

"In our mind, the primary purpose of higher education institutions is to educate and graduate students," he told CNN.

You can see the entire list and read more about the methodology here.