My View: What will you do with an English degree? Plenty 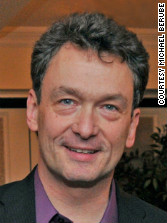 By Michael Bérubé, Special to CNN

Editor’s note: Michael Bérubé is the Edwin Erle Sparks Professor and director of the Institute for the Arts and Humanities at Pennsylvania State University, and the 2012 president of the Modern Language Association.

(CNN) - Almost every college student who considers majoring in English - or French, or philosophy, or art history - inevitably hears the question: "What in the world are you going to do with that?" The question can come from worried parents, perplexed relatives, or derisive, incredulous peers, but it always implies that degrees in the humanities are “boutique” degrees, nice ornaments that serve no practical purpose in the real world. After all, who needs another 50-page honors project on the poetry of Charles Baudelaire?

Well, strange as it may sound, if you’re an employer who needs smart, creative workers, a 50-page honors project on a 19th century French poet might be just the thing you want to see from one of your job applicants. Not because you’re going to ask him or her to interpret any poetry on the job, but because you may be asking him or her, at some point, to deal with complex material that requires intense concentration - and to write a persuasive account of what it all means. And you may find that the humanities major with extensive college experience in dealing with complex material handles the challenge better - more comprehensively, more imaginatively - than the business or finance major who assumed that her degree was all she needed to earn a place in your company.

We have plenty of anecdotal evidence for the value of the humanities. Over 25 years of teaching, I’ve had many students tell me - sometimes five, 10, 20 years after they graduated - that their English major gave them the intellectual skills they needed in their careers, while introducing them to some of the most challenging and delightful works ever written in our language. At the Modern Language Association, any one of our almost 30,000 members can say something similar. That’s why we’re such passionate advocates of study in the humanities.

And as Richard Brodhead, president of Duke University, has pointed out, we can point to success stories like Martin Dempsey, chairman of the Joint Chiefs of Staff, or Harold Varmus, director of the National Cancer Institute, Nobel laureate and former director of the National Institutes of Health. Each of them earned a Master’s degree in English. Dempsey studied Joseph Conrad and William Butler Yeats; Varmus concentrated on Anglo-Saxon literature. In other words, they immersed themselves in dealing with complex material that requires intense concentration, and they honed their intellectual skills in so doing. It turns out that those skills are useful - and transferable - anywhere there is thinking to be done.

But for the first time, we also have statistical evidence for the value of the humanities. In 2011, Richard Arum and Josipa Roksa published “Academically Adrift: Limited Learning on College Campuses.” What most people took away from that book (no doubt partly because of the title) was that college students are goofing off: They spend far more time on social activities than on homework. The results show up on a test called the Collegiate Learning Assessment, which basically asks students to deal with complex material and write a persuasive account of it. “At least 45% of students in our sample,” Arum and Roksa write, “did not demonstrate any statistically significant improvement in CLA performance during the first two years of college.”

That’s not a happy result by any measure - and it makes college sound like a waste of time and money. But when you break down the numbers, a funny thing happens: Students showed improvement in “critical thinking, complex reasoning, and writing skills” largely to the degree that their courses required them to read at least 40 pages a week and write at least 20 pages in a semester. The more reading and writing they did - serious reading, analytical writing - the more they learned. A remarkable finding!

Too many students (and their parents) think of college as the place that will grant them the degree they need to work at X job. The problem is, X job might not exist 10 or 20 years from now. Or X job might be transformed into something else, something that requires critical thinking, complex reasoning, and writing skills.

When that happens, and it happens all the time, humanities majors find that their degrees were good investments after all - and that they are employable anywhere in the economy where there is thinking to be done.

The opinions expressed are solely those of Michael Bérubé.