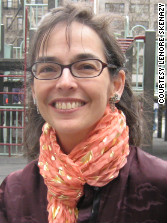 At another school, this one just about as far away from Newtown, Connecticut, as possible - Anchorage, Alaska - the kiddie Christmas concert also was allowed to go on, but this year all the attendees had to sign in.

Personally, that sign-in thing has never made any sense to me, even in my town of New York City, where it is required of all public school visitors. I mean: If I’m clever enough to plan a terrorist act, wouldn’t I also be clever enough to get a fake ID, like any self-respecting 16-year-old? No one authenticates my driver’s license when I hand it over. The guard just takes down my name (or fake name, as the case may be) and logs it into a book. I sign next to it and sashay in.

How much safer is anyone - except the guard, who gets to keep this pointless job?

Other schools around the country have posted cops outside, sometimes in cars. But if those cops are really ready for mayhem, shouldn’t they at least be on their feet? Meantime, a school district in rural Iowa announced on its Facebook page that from now on the doors to every school in the area would be locked. If a particular school does not have a buzzer system in place (because we’re talking rural Iowa!), well then visitors, volunteers and parents must make a phone call to the school’s office and wait for the secretary to come open the door.

Another reader wrote that her child’s school now requires all students to wear their identification tags. (Because…why?) But my favorite post-traumatic stupidity involves a day care center that has asked all parents from now on to slam the door on other parents behind them. As the director explained in a note home: “One of the biggest concerns at this center is how often parents ‘piggyback’ on the parent in front of them, thus bypassing the need to enter the security code.”

Expect a fellow parent to hold the door open for you just because you’re standing there with a baby in one arm and a briefcase in the other? No way! This is a safe community, and a safe community treats all people, even the ones cradling their own children, as potential psycho-killers!

And so it goes, after Sandy Hook. Distrust. Panic. Terror. This feeling of being besieged on all sides used to be considered paranoia.

The opinions expressed are solely those of Lenore Skenazy.