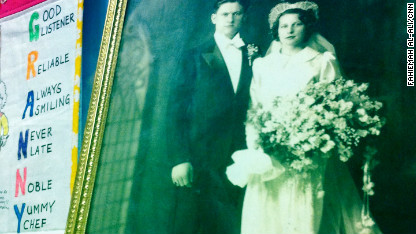 Four generations of Zhelesniks and scores of Sundance staff, parents and alumni – some as young as 8, some as old as 30 – filled the room for the festivities, all with personal stories about spry, slender Granny.

Zhelesnik, who is a mother, grandmother and great-grandmother, was born on January 12, 1914. She’s lived through two World Wars, recessions, depressions and was happily married for 61 years before her husband passed away in 1999.

And while many things have changed since her days as a student, Granny says one thing has not.

The fun-filled afternoon capped off with an open mic "Granny tribute," which included lively performances by Sundance’s students and alumni, including one by 11-year-old Lucas Schultz, who will soon be touring with a national production of the musical “Mary Poppins.”

Zhelesnik’s 69-year-old daughter, also named Agnes, and also a teacher at the school, tenderly held her mother’s hand as they blew out 99 candles on her birthday cake. 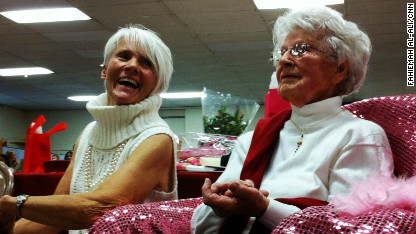 Agnes Arakelian celebrated with her mother, a teacher known as "Granny."

Granny didn’t want gifts; she asked guests to make a donation to her favorite charity, Children’s Specialized Hospital in Mountainside, New Jersey. But the school presented Zhelesnik with a surprise – a quilt, with each unique fabric square designed by a Sundance class.

So how much longer does Granny think she’ll continue teaching?

“She’s really unique because she still hasn’t retired and she’s a really good cook. And she’s still out and about,” 9-year-old Ryan Rosenthal, a Sundance alum, said.

“And the fact that she’s not in a wheelchair or doesn’t need a cane or something –” his identical twin, Lee, added.

“Or a walker!” Ryan chimed in.

But if you ask Zhelesnik what her secret is, her answer is simple.

“It’s the children. The children are the greatest,” she said. “You know, you have your own, but when it’s these kids, they’re just something else.”