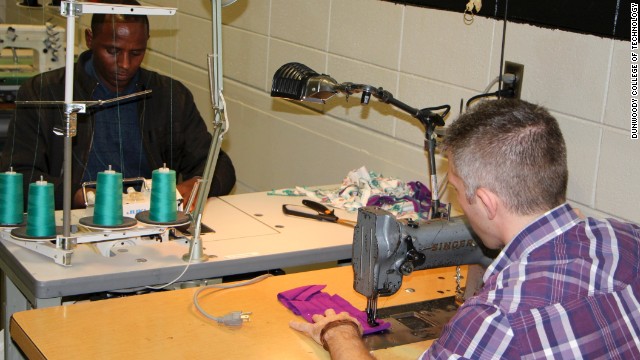 Students learn industrial cutting and sewing in a training program organized by a coalition of businesses and industry partners.
March 6th, 2013
05:00 AM ET

(CNN) - By day, Scott Loeser works from home for a company based in Hong Kong, selling stationery and school supplies to American big-box retailers.

In the afternoon, he rides a bus about 30 minutes from St. Paul, Minnesota, to a studio where he makes small leather goods by hand in the hopes of one day selling them for his own company. Before he can do that, though, he figures he needs to know how to use a sewing machine and make a scalable product.

"I want to be the guy selling stuff to Asian companies instead of selling for them," said Loeser, 35, whose background is product development, sales and retail branding. "I want to make a name for myself, but even if I have a product that's successful and great, how cool would it be if I could also say that I sew my own product?"

To get closer to his dream, Loeser enrolled in a "sewing and production specialist" course at Dunwoody College of Technology in Minneapolis, where he'll learn the basics of sewing in an industrial setting and the production process.

The program includes on-the-job training and a paid internship with a company in the Twin Cities region that could lead to a full-time job. Upon completion of the 22-week program, which began in January, he'll earn a certificate in industrial sewing through Dunwoody.

It may not sound like the sexiest gig ever, but Loeser is one of 18 students who see the program as a ticket to a brighter future. Ranging in age from 18 to 64, their reasons for joining are as varied as their backgrounds. Some are lifelong Midwesterners, but nearly half are legal immigrants from as far as Somalia, Myanmar and Mexico. Some of them want to make use of a skill they utilized in their homeland or find a steady job that keeps them off their feet; others, such as Loeser, see a path to entrepreneurialism.

That the class exists is a testament to the growing demand for a trade considered nearly obsolete in the last decades of the 20th century. The last time Dunwoody offered a cutting and sewing class was in the 1940s before it was dropped because of a lack of industry demand, said Debra Kerrigan, dean of workforce training and continuing education.

Fast forward six decades and the demand for a skilled cut and sew industry has returned to Minnesota, home to about 8,000 manufacturing companies, many in desperate need of a workforce trained in trades lost in an era of outsourcing and automation.