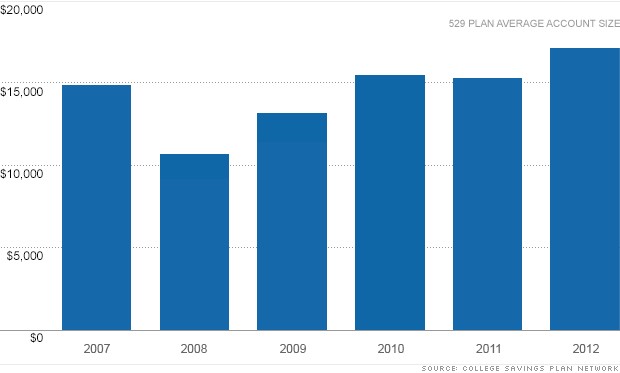 New York (CNNMoney) - As tuition soars, parents and grandparents are putting more money than ever into 529 college savings plans.

Average balances for 529 college savings and prepaid tuition plans grew to a record $17,174 in 2012 - up 12% from an average of $15,349 in 2011, according to a report from the College Savings Plans Network, a nonprofit and affiliate of the National Association of State Treasurers.

Also known as "qualified tuition programs," 529 college savings plans are typically offered by the states and allow holders to save money and withdraw it tax-free, as long as the proceeds are used towards approved college costs - typically tuition, fees, room, board and other required supplies. Another kind of 529, prepaid tuition plans, let savers prepay for future tuition and lock in current prices, but they typically do not cover other expenses.