(CNN) - As Quanesha Wallace remembers, it was around this time last year when the idea first came up at Wilcox County High School. It was nothing big, just chatter about prom, school, what comes next, what they'd change.

If things were different, someone said, we'd all go to the same prom.

For as long as anyone could remember, students in their South Georgia community went to separate proms, and homecoming dances, too. White students from Wilcox County attend one. Black students, another. They’re private events organized by parents and students, not the school district. Schools have long been desegregated, but in Wilcox County, the dances never changed. 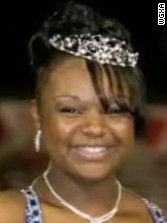 The friends all agreed they'd go to an integrated prom, Quanesha said, and when they asked, others said, "Yeah, I'd go, too."

"We are all friends," Quanesha's friend, Stephanie Sinnot, told CNN affiliate WGXA-TV in Macon, Georgia. "That's just kind of not right that we can't go to prom together."

So now it's April, and prom is coming up, and these black and white friends, longtime pals who go to classes together and play sports together and hang out together, are going to prom together, too. For the first time, students are organizing an integrated dance, one that welcomes any of Wilcox County High's 400 students.

"This is going to be the biggest prom ever to come through Wilcox County," said Quanesha, one of the event's organizers.

The theme will be "Masquerade Ball in Paris." There will be an Eiffel Tower and Mardi Gras-style masks, dancing, flowers, catered food and a clubhouse in nearby Cordele. They're expecting gowns, ties, manicures, up-dos, sparkle. Quanesha has a date, although she hasn't decided on a dress.

Attendees will vote on a king and queen but also cutest couple, best smile, best dressed. They'll do a recognition ceremony for a classmate who died. They'll start a new prom tradition: a unity toast.

By Thursday afternoon, about 50 tickets had sold for the integrated prom. They're aiming for 100. They're not sure they'll make it.

Not everybody is excited about the idea. Posters for the integrated prom were torn off the walls of the high school. Students who usually plan dances didn't get involved with this one. Nothing was different about this year's homecoming dances: Quanesha, the queen, is black. The king, white. She thought she might get an invite to the other prom, but they went to separate dances, and appear in separate yearbook photos, she said.

When students approached him about hosting an integrated prom, Smith wrote, he and the county’s board of education “not only applauded their idea, but we also passed a resolution advocating that all activities involving our students be inclusive and nondiscriminatory.

“I fully support these ladies, and I consider it an embarrassment to our schools and community that these events have portrayed us as bigoted in any way.”

The statement was no longer on the schools' website Thursday night, but a new statement posted by Friday morning said the high school's principal "will place the 2014 Prom on its agenda for its next meeting."

Smith did not return CNN's phone calls or e-mails.

Wilcox County is not the only place with a racially segregated prom, nor is it the only one that's attracted widespread attention in recent years. In the 2009 documentary “Prom Night in Mississippi,” director Paul Saltzman followed the preparations for the first integrated prom in Charleston, Mississippi. Actor Morgan Freeman, a native of the area, offered in 1997 to cover the cost if the school board would hold an integrated prom, but the offer wasn’t accepted till 2008.

Students and parents say it's hard to spark conversation that breaks what's now seen as tradition.

"I've lived here all my life. Nobody pushed the issue. This year, these children - we didn’t have any idea it was going to go as it did," Quanesha's mother, Linda Wallace, said Thursday. "Before we knew it, it was like a wildfire."

Indeed, Wilcox County's integrated prom has gotten a lot of attention this week. Schools in the county of about 9,000 residents are on spring break, but while classes were out, the prom story appeared on the local news, and the story spread. They'd been raising money for the prom all year, and some donations helped, but they've picked up a lot in the last few days. The prom's Facebook page drew thousands of fans since it was set up Wednesday.

Most of the comments are positive. "Your efforts will open the eyes of many. I applaud your courage and hopefulness. Continue your fight for change this year and every year, not just in your school but throughout your community. It just takes one person to change the world," one person wrote.

"You are civil rights leaders of 2013!" another wrote. "I am so encouraged by what you are doing. I believe that your generation has the power to make things better. Keep going and never give up."

Still, Quanesha is a little nervous about returning to school Monday. A lot of parents and students support them, she said, but she knows some don't. Why else, after all these years, were they still holding dances that segregated white and black students?

"I’m all about sticking together, reasoning with each other," Quanesha said. "We have very strong-minded students at Wilcox County. I hope they’re there to back each other up."

The friends and organizers are trying to enjoy it. Soon, most of them will be graduating. Quanesha plans to go to college to study psychology. She said she's not going too far from home for now. She wants to make sure the prom keeps going, and she can come back to help encourage the underclassmen who will have to take it on next.

"I don't want to just leave them hanging. I know we're going to leave them a little money," Quanesha said.

"New tradition. Leave them a little something so it won't be so hard for them like it was hard for us."