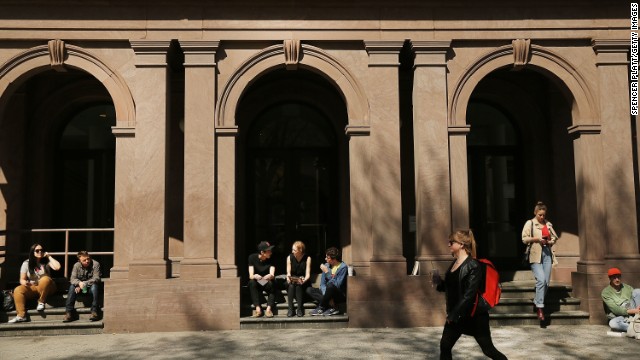 Cooper Union has provided free education to its students since 1859. Various investments, such as real estate in the Chrysler Building and elsewhere in Manhattan, have provided the funding in the past. Those investments, however, have since fallen short of covering the school’s long-term costs.

“The Board thoroughly analyzed a wide range of options, mindful of how the full tuition scholarships have been central to our identity,” said an April 23 statement from the Board of Trustees. “In the final analysis, however, we found no viable solutions that would enable us to maintain the excellence of our programs without an alteration of our scholarship policy.”

Although tuition increases won’t affect current students, protesters say they're motivated by a lack of transparency in the administration and their hopes for future students. They insist that the change in cost undermines a tradition of meritocracy that sets Cooper Union apart from other private institutions.

Saar Shemesh, a 21-year-old transfer student, said from inside Bharucha’s office, “The way I see it, these students that will be coming in 2014 … they don’t have a voice yet. They’re still 16-year-olds in high school right now, and if we don’t fight for them, nobody will. … We’re already here. We don’t have to fight to be here, but we need to fight for the people that aren’t here yet and that have dreamt of coming to this school for their entire lives, like we had.”

While students initially entered the building to present a letter to the president citing a vote of “no confidence” on behalf of the School of Art, Bharucha exited the building before being confronted by the protesters. Upon arriving at the empty office, students changed course and organized a sit-in, stating that they would remain until receiving a response from the administration. The response they got was not what they were looking for: a threat of expulsion for all students involved in the protest. This threat is currently being reassessed.

“First and foremost, we want him to resign,” Shemesh said of the issues with Bharucha and the administration. “We don’t feel that he’s fit to run the school. We want tuition to be revoked. We want more transparency with the Board of Trustees, potentially a new Board of Trustees. We want mostly transparency and fairness. We want representation of student voices in administrative policies and processes for decision-making. We want a more open institution.”

Kerry Carnahan, a spokeswoman for the advocacy group Friends of Cooper Union, shared a statement announcing the group’s solidarity with student protesters: “We have come to realize that the President and board have their own financial, ideological priorities that don’t add up with what the majority of us understand Cooper Union to be – ideas that don’t align with the ideals the school was founded on.”